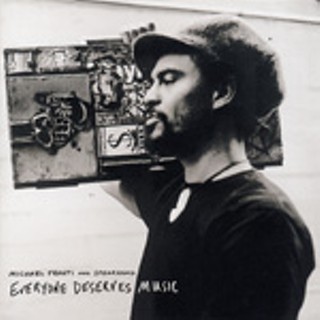 Everyone Deserves Music (Boo Boo Wax/iMusic) For nearly 20 years, Michael Franti has expressed himself through music. He's realized his message as founder of the industrial/punk Beatnigs, one-half of Disposable Heroes of Hiphoprisy, and most recently with Spearhead, a band that mixes rock and hip-hop with rare fluidity. Throughout, Franti's been a sharp-tongued socio-political critic, taking cues from the likes of Chuck D but with an organic vibe that's never attracted a large following. Everyone Deserves Music, the fourth Spearhead studio disc, feels like a breakthrough. Musically, it's as diverse as anything the band has ever done, smoothly vacillating between forceful beats and heady grooves. People tend to compare Spearhead to the positive hip-hop of De La Soul or Arrested Development, but that's selling them way short. Everyone Deserves Music displays influences as wide-ranging as Fela Kuti (the Afro-Caribbean rap, "Pray for Grace"), the Clash ("Yes I Will"), and Curtis Mayfield (the sunny soul style of "Bomb the World"). The acoustic base for most of this music suggests a lighter atmosphere than the wallop the lyrics pack. The fine line drawn is imperceptible and yet is evidence of the album's inspiration. Few would argue with its primary sentiment, best summed up by the title tune's thoughtful chorus: "Even our worst enemies deserve music." (Saturday, 8pm, HEB stage)