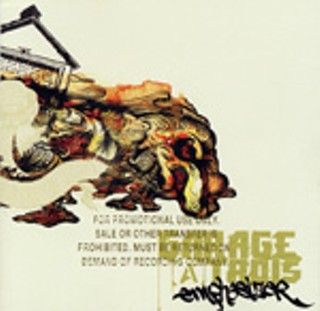 Emphasizer (Tone-Cool/Artemis) For the past 30 years, hip-hop producers have experimented with turntables, synthesizers, and samplers in an effort to replicate the brilliance of early-Seventies instrumental sessions by the likes of funksters like the J.B.'s, Roy Ayers, and Kool & the Gang. Garage a Trois, with Charlie Hunter on guitar, Galactic's Stanton Moore on drums, Skerik on saxophone, and Mike Dillon on vibes, is just such a synthesis. Beyond their obscure, vinyl-only Mysteryfunk, Garage a Trois serves up its proper studio debut, Emphasizer, which runs the gamut of funk possibilities. The quartet moves comfortably from the downhome blues of "Delta Skelta" and Maceo Parker-inspired aura of "Interpretive Ape Dance" to the discofied feel of "A-Frame" without skipping a beat. While Latin rhythms accentuate "Plena for My Grundle," Middle Eastern and Asiatic techniques inform "Gat Swamba" and "House of Hand Wash." Aside from Hunter's uncanny ability to play basslines on the bottom three strings of his eight-string guitar while simultaneously crafting melodies on the top five strings, Garage a Trois transcends the impotence of lounge acts with the art of improvisation. For instance, "Launch" quickly departs its plodding formula in favor of a full-scale Weather Report freak out. Most notable is "Hard Headed Rio," which is nothing short of a dead-on DJ Shadow impersonation, and proves that however varied the means may be, all legitimate funk ends up in the same damned place. (The Charlie Hunter Trio plays Friday, 4pm, on the HEB stage; Garage a Trois plays Saturday, Sept. 20, at Stubb's. The show is sold out.)