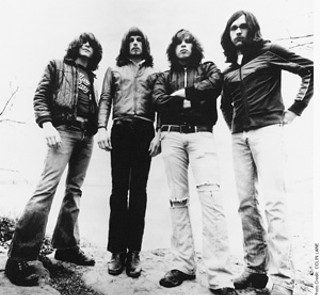 When Dusty Springfield found love in Memphis with the "Son of a Preacher Man," she birthed Nathan, Caleb, Jared, and (cousin) Matthew Followill -- Kings of Leon. Preacher/ patriarch Leon Followill must be proud.

Mom's proud too, "it" being the Chosen One-type worship bestowed upon these scruffy, rockin' youngsters. And on the third day, the South arose.

"When people say Southern rock, the things we're influenced by from the South isn't the music of bands like the Allman Brothers and Lynyrd Skynyrd," explains the 19-year-old singer. "We're more influenced by the gospel music we grew up on, folk music.

"The kind of gospel music we grew up on was in very small churches, very sweaty. It wasn't like stuff you hear on recordings. The stuff we listened to would be live, like choirs. Sometimes, we'd be the only white people in these churches. It was real."

Live, the pressure's on y'all.

"Oh definitely. You don't sit there and say, 'We've gotta do it like that.'

"But deep down, that's what we grew up knowing, so when we're up there, and we're playing our best, and we look around at each other, that's what it feels like. It feels like we're giving it everything."