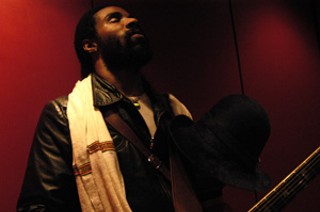 Cody Chesnutt can't come to the phone right now. At least, that's what his answering machine at home says. Chesnutt's schedule is packed after crafting and guesting on "The Seed," the hit single from the Roots' Phrenology.

No extra time exists after his own acclaimed hip-hopper, The Headphone Masterpiece, became one of 10 finalists for the respected Shortlist Music Prize. As if he didn't have enough on his plate, he also has a newborn baby.

"It's all been a blessing," admits the soul folkie about his current winning streak.

The Headphone Masterpiece is a stunning and hefty assemblage of 30-plus songs, breaking lyrical ground about family, debt, and drugs. Chesnutt comes across on disc like an old pro, using everyday know-how to mold songs that owe as much to Neil Young as they do to Bob Marley or Stevie Wonder.

"I was like a human sponge, soaking up everything," he says, "and I just squeezed it on the tracks. It's almost like a sonic diary."

The entries are fueled by a spiritual perspective, yet still poke fun at such secular habits as materialism and casual sex. It's a tough balance, between preacher and party-hopper.

"I try to see these things without the human eye," he says. "I just went to the MTV Awards, and I see all the paparazzi, so I imagine people without [media]. God is bigger than all of it."

Sometimes cryptic and often powerful, Chesnutt is just like his music: a blessing in disguise.