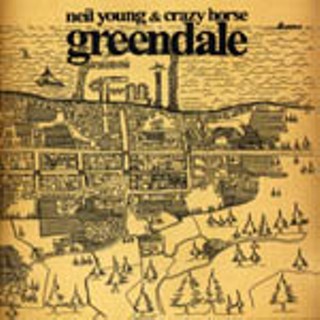 On the Beach (Reprise)

. That's what anyone under the age of 112 will mutter after jettisoning the audio portion of Greendale outta their Obstron (hard drive, iPod, whatever). Who cares about some Sixties-loving environmentalist fable when the entire 78-minute musical backing plods along dumbly like a mule pulling a coffin through mud? Neil Young's Crazy Horse cohorts, bassist Billy Talbot and drummer Ralph Molina, hoof a dead-weight beat that never wavers above the flat line of the bosses' rigor mortis guitar. Unlistenable, grade-A manure. The bonus DVD, on the other horseshoe, recorded solo live acoustic in Dublin, brings to life a sly satire for these Imperialist times, Young's tight-lipped rambling fleshing out the already charmed storybook CD booklet. "Devil's Sidewalk" and "Leave the Driving" quiver on Shakey's tremulous activism, while the stinger riff of "Carmichael" stands in stark contrast to quicksand production of its CD counterpart. Live, saving mother Earth via closer "Be the Rain" is a sincere if simplistic imperative rather than the pat moral it becomes on the album. If his offhand allusion in concert is given any credence, the Greendale DVD may be Young's best-realized song cycle since 1975's masterful Tonight's the Night. Laced among that troubled decade's best work -- Zuma, Decade, Rust Never Sleeps -- are four scattershot Young titles finally hitting digitized aluminum bit for the first time. On the Beach (1974) is the silver dollar in the sand, tarnished just enough by time to be an off-classic, from the shrugging resolve of "Walk On" and elegiac follow-up "See the Sky About to Rain" to the undated topicality of "Vampire Blues" and ice tones of "Revolution Blues." In its dusty wake, the Crazy Horse-kicked American Stars 'n' Bars (1977) most resembles Greendale, albeit with better songs: camp fire kick-along "Saddle Up the Palomino," shrieky "Bite the Bullet," and hearth-warmer "Will to Love," not to mention crowning achievement "Like a Hurricane." Hawks & Doves (1980) is a short (30 minutes), occasionally clumsy country-folk piece peppered with allegory and featuring the singing saw centerpiece "The Old Homestead" and the tunefully fiddling irony of the title track. Pushing into the Reagan era, 1981's cranky, trebly Reactor has surprisingly little to say between "Opera Singer" ("ho-ho-ho-ho-ho-ho") and nine endearingly metal minutes of "T-Bone" ("got mashed potatoes, got mashed potatoes, got mashed potatoes, ain't got no T-bone"). "Southern Pacific" glides on gleaming steel rails, while concluding seven-minute epic "Shots" rings like Kent State. Don't shoot Neil Young just yet, there's still some life left in the old nag.