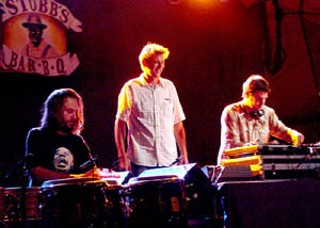 Stubb's, Aug. 29 Somewhere there's a school where the DJs go to learn their trade. It's probably on Ibiza, and it's there, among the cavernous library of Seventies-era Sugar Hill 12-inches and beside the soccer pitch emblazoned with the MixMag logo, that they learn the single most integral component of DJ craft: how to wave their arms skyward, shouting, "Lager, lager, lager!" Years back, Fatboy Slim mastered the art of the gleefully ingratiating crowd-wave to such a point that it was folly for anyone else to take it on. Arms outstretched, wrists slightly bent at a cool 331/3-degree angle, his index fingers pointed crowd-ward as if to say, "This beat's for you and you and you, and aren't you the lucky ones?" It wasn't until Groove Armada, the London-by-Yorkshire duo of Tom Findlay and Andy Cato, made their inaugural Austin appearance that it became apparent that a torch had been passed. Cato, the blond, and at 6-foot-8, the preposterously elongated one, waved his hands in the air as though he couldn't be bothered to drop them back down to burrow through his record crate. Groove Armada's smashing new Love Box CD is a whirlwind blend of Big Beat and funk, but their long, hit-and-miss Stubb's set eschewed the muscular grooves of said new release in favor of torpid horseplay, a move that left a healthy house wondering where the duo's famed psycho groove was. (At the Elephant Room it turns out.) Teasing hints of super hit "I See You Baby" never escalated into the actual track, and even a late-set appearance of Underworld anthem "Born Slippy" couldn't mask the fact that all told, Groove Armada was less pleasure craft than pricey rental rowboat, a social lubricant with a pathetic light show and 10 seconds of -- stop, please, you're killing us -- Aerosmith scratching.