All the hip-hop that fits in ATX.

ATX in the House

It's one of the fundamentals, dating back all the way to the Sugar Hill Gang's "Rapper's Delight": You don't stop. Ever. So although Austin's hip-hop community tends to keep a low profile in the local media -- especially compared to the city's myriad other scenes -- it's out there, effectively hiding in plain sight. Up north, down south, on Sixth Street, and the Eastside, local MCs, DJs, B-boys, promoters, and entrepreneurs are doing their part to ensure there's more to our self-proclaimed "Live Music Capital of the World" than fiddles and guitars. A lot more.

Situated above the Pecan Food Mart at South First and Live Oak, 3rd Coast Underground Hip Hop specializes in independent releases straight from the sun-scorched Texas streets. "Anybody not on BET or MTV -- that's underground," explains man behind the counter, Fresh. One wall is devoted to local artists including Bavu Blakes, Mirage, Overdose Click, and Baby Boy G, but those dozen or so releases are dwarfed by product from our humid neighbor to the east. Fresh, who's worked at 3rd Coast about a month, says it's the slo-mo, syrup-fed sounds of Houston (aka "Screwston," "Hustle Town") that rev his customers' engines. "Everybody in Austin buys Houston rappers," he says. Thus, Bayou City artists like Lil' Flip, Z-Ro, Guerilla MAAB, and Big Moe are almost as popular in Austin as in their hometown. Though his personal favorite is Tupac, Fresh, a native Austinite who played some college football in California before moving back home, says he understands the attraction. "I support my Texas rappers," he says. "I relate to their lifestyle. I can't relate to 50 Cent up in New York. Texas is laid-back and slow."

Texans may like their rap laid-back and slow, but they work fast and hard to make it happen. Case in point is Eddie Duran, aka Eddie D. In addition to managing Non Stop Music & Studio at 5326 Manchaca for the past few months, Duran is also a promoter, producer, and MC with local crew Forty One Entertainment, who released Forty One Freestyles Part 2 in June. As with 3rd Coast, Houston rap is the overwhelming favorite at Non Stop. "People aren't looking for 50 Cent or Ja Rule," Duran says. "They want DJ Screw and Swisha House." Duran tries to bring in visiting artists to Non Stop for an autograph session at least once a month -- Lil' Flip, Z-Ro, and Trae from Guerilla MAAB have all visited -- and many appear on Texas Collaboration Volume 1: Best of the Heard & Unheard, an 18-song CD released on the store's Non Stop Music label. With studio time starting at $75 for a three-hour block or $30 for a one-hour freestyle session, Non Stop is also an ideal entry point for budding young rhymers. "Some people want to put a CD out just to put it out," cautions Duran. "Take your time and make sure it's what you want to be out there."

The Austin Powers Mixtape, a blend of local and national talent compiled by Austin club DJ Rapid Ric, is the hottest new thing at Backstage Music, a mom-and-pop operation tucked away in a converted house at East Cesar Chavez and Pedernales. Also selling well, reports owner Raymond Huerta, are the comic stylings of Chingo Bling and the Color Changin' Click (latest release: Homer Pimpson), as well as Latino rap from the likes of South Park Mexican protégé Juan Gotti. Not faring so well is Tejano music post-Selena, which Huerta says he has a hard time moving after tastes shifted to norteño. What artists are left "don't seem approachable anymore," Huerta says. "These [rappers] sell because people are like, 'I saw him buying out the mall the other day.'" Huerta, a former B-boy and DJ, says he'd eventually like to put a DJ booth in the store to go with the mobile stage that will host the Kumbia Kings Sept. 12. Backstage enjoys a sort of home-field advantage, he says, because many residents of the largely Hispanic downtown neighborhood would rather walk down the street than get in the car for a trip to the mall. "They'll even buy 50 Cent's stuff here, because they don't want to drive anywhere," notes Huerta.

"Revolutionary" is how ATX Records owner Vardon Williams, aka Haps, describes his skate-culture-bred philosophy. Williams, who moved to Austin from El Paso in 1997, likens ATX's origins to punk rock's DIY ethic -- the store opened April 20, 2002 -- but adds that "now we have a store, things are on a more professional level." Even so, ATX remains deeply rooted in the basic elements of hip-hop. The store, located in the Willow Creek shopping center off East Oltorf, has its own record label, offers a wide selection of vinyl, hosts breakdancing exhibitions every Thursday, and the walls and floor are covered with graffiti from local and national taggers. Also contributing to ATX's "underground takeover" is the small studio in the back, where Williams, whose album, What's Happenin', drops Sept. 24, has recorded Myka Nyne of Freestyle Fellowship, L.A.'s Acid Rain, Seattle's Old Dominion, Al D of Houston's Screwed Up Clik, and Chicago's Hellcent and Qwazzar. As part of Austin's Turtleheads collective, which also includes Azatat, Cell, DJ Bean, and Zeale 32, Williams plays about two shows a month on average, and will bring a little bit of Austin to Portland and L.A. when his album comes out. "It's new school beatnik," he says. "We're trying to blow the roof off with beats and words."

So what's it like being a rapper from Austin, anyway? "It's still pretty underground here," says Crockett High School graduate Kool Whip, now 28 and signed to Bay Area-based Black N Brown Entertainment. Whip, who was born in Lexington, Ky., learned his trade by testing out his material on karaoke crowds. "I even took it to a country bar, and they loved it, it's so diverse," he chuckles. He kept up the hustle to the point where he now plays five or six local dates a month, and has opened for Snoop Dogg, DMX, and Juvenile. "I wormed my way in," he says. Estimating he lost $50,000 in product when Houston's Southwest Wholesale distributors shut down earlier this year, Whip has kept his game sharp by cultivating a network of labels in Houston, Corpus Christi, and San Antonio, and staying on the road constantly. "All these little towns, they're lovin' us," he says. Current release The Kingpin is on the racks now, and he reckons follow-up Ghetto John Wayne will be done in February. There's also the 18-artist Capitol City Compilation, dropping soon on Whip's Ryda Thugz Records. "I'm on my grind 25-8," he says.

About to release his 10th album, Dub Plates Repressed Vol. 2, former Hip Hop Humpday MC Tee Double has become something of an elder statesman of Austin hip-hop, which he says has become largely DJ-based. "It's easier for the clubs to pay one person, and they're more likely to make more money," he explains. The scene, he says, is "restructuring itself right now," adding that talented local MCs like Bavu Blakes, Element, and Tray God are holed up recording and "waiting to see if anything jumps off." What that might be he can't say, though he's encouraged by the crowds visiting outfits like Atmosphere and Project Blowed have drawn recently. "It's cool to have those shows," says Double, "but my thing is to put more locals on the bill instead of just a local DJ." Radio remains fertile ground, he points out, citing Wendy G's 11pm-1am Thursday show on KVRX and Brotha K's Dolla Holla Show 4-6pm Sundays on KOOP, which marks its seventh anniversary this week. Besides serving on the advisory board of the Austin Music Foundation's Incubator project -- whose first hip-hop/urban winner, MC Overlord, releases The Re-Up Sept. 13 -- Double is trying to set up his own distribution network. Austin's relative anonymity in hip-hop circles is not all bad, he thinks. "There's really no sound, which is great," he says. "You can't pinpoint it. Everyone here has their own identity." 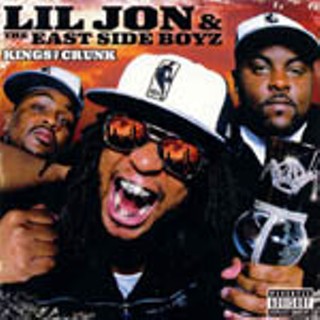 "Got Some Teeth," Obie Trice

"The Way You Move," OutKast

Juelz Santana, From Me to U (Def Jam)

Screwheads, All Day Everyday (Playa Made)

Lil Jon & the East Side Boyz, Kings of Crunk (TVT)