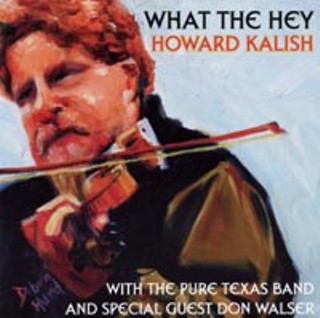 What the Hey "I like being a sideman," quips Howard Kalish in the liner notes to his solo debut. Kalish is a first-rate fiddle player, having logged countless gigs with Don Walser, Cornell Hurd, Justin Trevino, and too many other Austin honky-tonkers to name. This time, the sideman is out front, backed by most of Walser's Pure Texas Band, and the results are typically rewarding. Kalish's playing shines on instrumentals like "Philco Dr" (named after the South Austin drive, of course), "South First Street Rag" (notice a theme here?), and the album's title track. Though Kalish may not be up there with Johnny Gimble or Buddy Spicher, he more than makes up for it with his phrasing and inventiveness. The songs are tilted toward classic Western swing and honky-tonk, such as Moon Mullican's "I Was Sorta Wonderin'," featuring Don Walser on guest vocals; Red Foley's "If You're Cheating on Your Baby"; and a twin-fiddle swing version of Eddy Arnold's "Cattle Call." Even the songs that aren't vintage swing get the treatment, Kalish's unpolished vocals helping call up a bygone era. There's more than a little Texicalli Grill humor ("Bonafide Bulldozer Man" with Kalish on guitar) and plenty of astonishing playing from session guys like Dave Biller, Pure Texas steel player Scott Walls, Floyd Domino, and of course, the perennial Skinny Don Keeling. With good songs, great playing, and production that sounds like the band is in your living room, this is a pure-Texas release.