There's like some shows and stuff, and some new places to see bands, and, like, people are getting shot, too.

Devotees of Red River's improvisational noise savants Tia Carrera can catch the local trio past tonight (Thursday), when Tia drummer Erik Conn's former band Antebellum reunites for a one-off show at Emo's. The plutonium-heavy Dixie rockers are playing for the first time since February 2000 to bid farewell to bassist/vocalist Mike Flannery, who's returning to his native Washington, D.C., after doing time in several local outfits and even booking Emo's for a while in the late Nineties. Flannery's American Psycho Band, one of the few Austin acts to have a release on Sub Pop, will likewise reunite for the show, sludgemeisters the Sabians rounding out the evening. "We're going to play long," promises Conn, who also swears the finger he hurt skateboarding last weekend won't hinder his assaultive style in the least. It better not, because he'll be right back at Emo's Saturday for the Grillers Ball, where Tia joins SpaceTruck, Moonlight Towers, Masonic, and Victor for an afternoon of smoked meats and smokier rock. The Carrerans' fan base is swelling quicker than Conn's hands after a gig, and they'll soon have real live product to sell: a live-in-the-studio LP on Perverted Son due in October, with a collection of live recordings set to come out on Emperor Jones around the same time.

"I want to have a space that fosters creativity," explains Thomas Popov, surveying the steel skeleton on South Congress that until recently housed firearms merchant Just Guns. Popov and wife Le bought the space earlier this year, and are in the process of transforming it into Factory People, a performance venue that will also sell clothes. Specifically, "clothes to listen to music in," says Popov, who envisions artists, writers, and designers acting as guest DJs, as well as both a stage inside the store and a rooftop deck he calls "indulging my Beatles at Apple Records fantasy." Popov has already spoken to I Love You but I've Chosen Darkness about playing the store's grand opening in early October. A couple doors down, with Southern-style home cookin' up front and live music out back, D&L's Texas Music Cafe finally opened last week. Owners Debbie Mylius and Leone Becker have been working on the cafe, now open daily from 10am-4am, since January, and plan on limiting the musical menu to rootsier fare. "It's hard to blast rock & roll in someone's face when they're eating a $20 steak," notes Mylius. Music runs 7-10pm, with a benefit for neighbor Texas Folklife Resources this Saturday. Mylius, a former clerk at Waterloo Records and bartender at Ego's, never has to look far to cover a shift. "We have tons of musicians working here and playing here," she says.

The sleek, earth-toned downtown offices of Aspyr Media Inc. have the unmistakable, almost inaudible hum of twentysomethings hard at work, and for good reason. The company, best known for translating games like Tomb Raider, The Sims, and Castle Wolfenstein into Mac-friendly formats, is expanding its reach. Come Oct. 14, Aspyr will release three DVDs, including the feature-length, Gourds-soundtracked documentary Growin' a Beard. That same day, Aspyr's in-house record label -- helmed by Chronicle contributor Chad Beck -- bows with career-encompassing releases from flagship artists Knife in the Water and Milton Mapes. For those keeping score at home, that's the Austin slo-core quintet's brand-new album Cut the Cord, plus expanded and remastered versions of their first two, Plays One Sound and Others, and Red River. Gnarled roots-rockers Mapes get the same treatment, with the unveiling of new effort Westernaire and re-release of debut The State Line. Though he's had to learn how to run a label on the fly, Beck is optimistic about the future since he's already got a distribution deal in place and no longer has to double as Aspyr's receptionist. "A lot of people didn't know what I was even doing here until the last few weeks," he smiles.

It should be obvious by now that shotguns never make good party favors, but that point was driven home once again last weekend, when gunplay brought a raging after-hours party on Holly Street to an abrupt halt. "I honestly thought it was an M-80 or something until I heard all the sirens, and of course when I saw all the fucking cops and yellow tape out in front, not to mention the eerie quiet mood of the onlookers," Migas and Tia Carrera guitarist Jason Morales posted on Friendster Sunday. "I then realized someone was down." Down, as in dead. At press time, police are still searching for the culprits... When new Austin band Mr. Lewis & the Funeral Five went to collect their gear from Music Lab for a gig at Red Eyed Fly last Wednesday, they discovered their equipment missing; five guitars and various cords and pedals totaling around $9,000. The theft was especially suspicious because there was no forced entry and no other break-ins have been reported at Music Lab. Anyone with information is urged to e-mail gregjr6222@yahoo.com... Happily, a rumor that Cade Callahan, the ex-Weary Boys drummer who now fronts his own honky-tonk band, was in jail proved to be untrue when Weary fiddler Brian Salvi bumped into Callahan at the Continental Club. So people: Let's be careful out there.

Dixie Chicks agitator Natalie Maines and First Twin Jenna Bush sat within arm's length of each other in Antone's VIP area during Jimmy Cliff's show there last week, but a source close to the action reports absolutely no catfighting took place. Pity... Flamenco warriors Del Castillo, who appear on the soundtrack to Robert Rodriguez's new grown-folks movie Once Upon a Time in Mexico, will play a free Latin Grammy Awards viewing party Wednesday at Mark's on San Antone's Riverwalk. The CBS telecast starts at 8pm... The Fatigue Gang, a product of the same El Paso scene that gave us Rhythm of Black Lines, At the Drive-In, and now Sparta and the Mars Volta, plays a special afternoon show Saturday at Beerland with Knife in the Water and the Crack Pipes... Femme-punkers Fuzzy Sweater, formerly Litter Meet, play one final Austin show Sunday at Room 710 before moving to the more hospitable climes of Olympia, Wash. Be sure to take an extra umbrella, ladies... 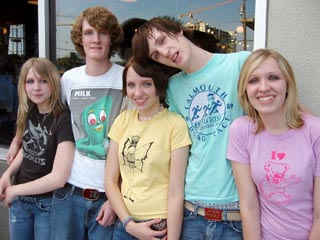 Just back across the pond from playing London's V Festival with the Foo Fighters, Red Hot Chili Peppers, and Coldplay, Tyler fivepiece Eisley unspooled an hour of bewitching dream-pop at Waterloo Records' "Third Thursday" fiesta last week. Though the youngsters, who are recording a follow-up EP to Laughing City this fall, hardly bat an eyelash at sharing the stage with their idols, hearing their music in public still takes some getting used to. "It's kind of embarrassing," said guitarist Chauntelle DuPree.

Anyone still mourning the loss of Sound Exchange -- and who isn't? -- take heart: A small part of the beloved Dragbound record store lives on the Web. Specifically, it's the Austin Show List, the club-listings zine once available free in Sound Exchange's front window, which UT computer science student Dan Machold has resurrected online at www.showlistaustin.com. "Basically, I missed it," says Machold, who's been getting advice from previous List publisher Mark Grady. "I found it a valuable resource, especially in reference to what shows are coming up in the future," continues Machold. "Most club ads in the Chronicle are only for that week." As before, the List focuses mainly on punk, garage, and indie shows, and Machold hopes to update it a couple of times a week. "I wanted to get it going before I got caught up with school," he says. 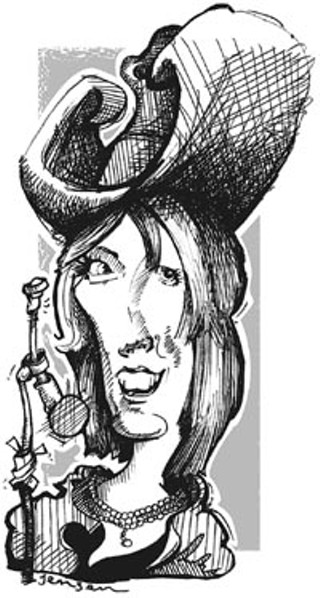 Save some energy at the Austin City Limits Music Festival, happening in exactly three weeks, because so many artists have saddled club dates onto their festival appearances that downtown will be more crowded than a weather map. Here's the forecast: Look for a high concentration of beards in the West End all weekend long, as La Zona welcomes Robert Randolph & the Family Band and the North Mississippi Allstars Friday, Keller Williams and the Charlie Hunter Trio Saturday, and Karl Denson's Tiny Universe with Soulive Sunday. It's twangs 'n' tattoos on Sixth Street Saturday when the Drive-by Truckers invade the Mercury with the Damnations, while sensible and sentimental indie-rockers converge on Antone's for the Old 97's and Li'l Cap'n Travis Friday and the Shins with Zykos Saturday. Over on Red River, conditions call for a high probability of girl-on-girl action at Ween's Saturday perv bonanza at Stubb's, with everything N'awlins steamy the next night for the ReBirth Brass Band and Kermit Ruffins. Astute weather-watchers will also want to check the Web sites of the String Cheese Incident, Mavericks, and Lucinda Williams to see when and where they might blow through.