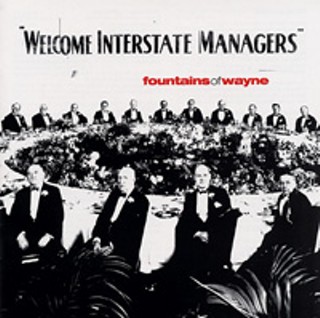 Welcome Interstate Managers (Virgin) Chris Collingwood and Adam Schlesinger, the New York-based duo that is Fountains of Wayne, understand it's a big deal to be down to seeds and stems. As a result, they've concocted a wry celebration of Middle America's man-child, painting a loving portrait of the eternal summertime of the emotionally stunted male who just wants to schtup his girlfriend's mom. Everyone's already heard the sing-song "Stacy's Mom," the hit of the summer concerning a young man whose girlfriend has a MILF; it's followed by the sweetly wistful "Hackensack," about a lonely loser longing for a girl who's left their hometown. Who can't relate to the futility of, "If you ever get back to Hackensack, I'll be here for you"? The real gem in this collection is, however, the Saturday Night Fever-era Bee Gees homage of "Halley's Waitress," which beautifully illustrates one man's quest to get a refill on his coffee, singing, "It's been so long, darling, don't you know we miss you when you're gone?" Don't be fooled by the album's poppy veneer, for the secret to Fountains of Wayne's genius is the ability to infuse personality into a typically personalityless segment of America, making sadness and mundanity both interesting and deceptively fun, much like the life of the perpetual boy.