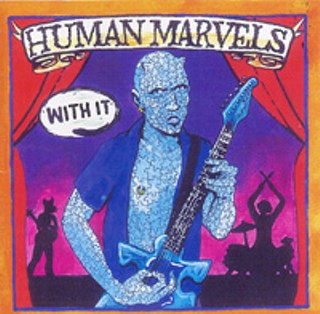 With It Before soaking a torch in lighter fluid, sparking it up, and giving it the old deep throat, Penn Jillette of magic/comedy duo Penn & Teller would pause and wax for a moment about sideshow ancestry. "The real freaks are the self-made freaks," he'd say, the folks who aren't born freakish, but use their bodies to display it. Meet Enigma and Katzen, Austin's friendliest self-made freaks. You've seen them around town: he of blue puzzle pieces and horns, she of tiger stripes and whiskers. With It, their musical debut, is culled from carnival stints across the globe, and while the CD can't possibly convey the show (for that you'd need an array of power tools), most of the material stands on its own. The lead cut, "Human Marvels Theme," is steeped in carny lore, a marvel of musical composition that recalls the gentle lilts of Nino Rota and twisted turns of Kurt Weill. The lush, Eighties-tinged pop balladry of instrumental "Paper Hearts" could easily score one of those poignant Cirque du Soleil pieces about a sad clown, while "Iron" melds the ominous basso profundo of Cramps-era stomp with some creepy Angelo Badalamenti. The upbeat, surfy "Cruising With Egor" could be the Human League on 'ludes. Unfortunately, too many of the other tunes lack this engaging use of melody, allowing lyric lines to monkey fairly simple chord patterns. The disc could've used an editor. When the band riffs and allows synths or noodly guitar lines to do the work for them, they mire in a Gothic gloom; when they get compositional, however, the Human Marvels are marvelous.