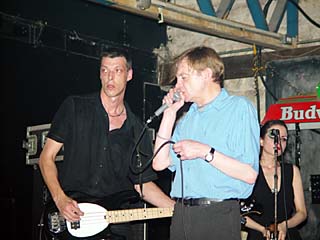 Emo's, July 16 Lurching into "The Joke" from 1995's Cerebral Caustic, the Fall made it obvious why the masses had gathered at Emo's on a Wednesday evening. Witnessing Mark E. Smith in action was the dictionary definition of "rubbernecking," the crowd helplessly gawking at the irascible, middle-aged curmudgeon and his infinite barrage of corrosive one-liners and fuck-all demeanor. Everyone from Pavement and Clinic to Spoon has aped the Fall's click-clack rhythms and signature sing-speak vocals since their inception in 1977, yet Smith's brash attitude and acerbic world-view have kept them out of mass conscience the entire duration. As Smith walked onstage, the Fall's return to ATX was met with a palpable sigh of relief from hardcore fans, their anti-hero having finally arrived. Assault charges and visa issues have kept the Fall out of the States the past few years, suggesting Smith is quite a prick offstage, too. Obviously back at the top of his game, Smith led his latest lineup through 70 minutes of bare-boned rattlers, which worked in tandem with the humidity settling under the audience's collar. "Sparta FC," from the forthcoming Country on the Click, and the classic "Mr. Pharmacist" were crowd pleasers, but it was the one-two knockout of "White Lightning" and "Dr. Buck's Letter" during the second and final encore that finally satisfied Mr. Smith and crew. As the Fall delivered these jabs, one felt that if Jarvis Cocker, Shane MacGowan, and/or James Bond himself approached the stage in a duel-style challenge, Smith would've blown 'em away with a snarl and curl of the lip. Although Smith's band was nearly flawless, he refused to acknowledge it. Increasingly agitated as the set wore on, Smith tottered from one side of the stage to the other, moving microphones, twiddling amp knobs, and turning off the parts of songs he didn't want to hear. Disgusting in its accuracy, Smith's over-the-top cocky performance is why the Fall remains the band you love to ignore.