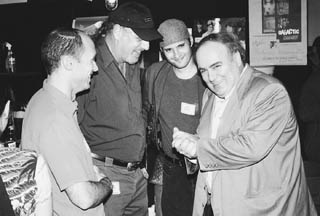 Having a great time at Willie's picnic while celebrating his first Independence Day as a free man in four years was part-time emcee Clifford Antone. Antone, who was released from the federal penitentiary near Bastrop last fall, has now satisfied his parole obligations and resumed his near-constant level of activity. Consuming much of Antone's time recently has been a documentary by filmmaker Dan Carlock, expected to be completed by fall. "It's just me, the club, and my friends," says Antone. "Like writing a book without words." Among many, many others, the film will include testimonials from B.B. King, ZZ Top's Billy Gibbons, and Buddy Guy. Antone also maintains his involvement with American YouthWorks, the downtown charter school, with his current interest being an arts and technology center that would offer hands-on education to at-risk youth. "That's really what I'm interested in," Antone says. "I don't think there's many things better than giving those kids a chance to go to a school where they might fit in." Antone's 28th anniversary commences tonight (Thursday) with a YouthWorks benefit featuring Ray Benson, Billy Joe Shaver, Patricia Vonne, Greater Tuna chameleon Jaston Williams, and an all-star blues band fronted by Toni Price, plus a silent auction; 469-SHOW for tickets, 236-6912 for sponsorship info. Asked to what he attributes Antone's remarkable longevity, the club's namesake doesn't hesitate with a reply: "We started for the music. There wasn't ever a business plan, and we've always maintained that same goal and feeling." Find more on the weeklong blowout in Club Listings.

July 3, the day before Austin's dead were preparing to have their doors of perception opened, venerable local dance club Texture closed theirs. In an e-mail message, owner Tarek Morshed wrote: "This e-mail is meant to clarify why Texture is closing. Texture, like a lot of local businesses, has experienced ups and downs the last year and a half. ... Unfortunately, we recently found ourselves in a position of not having the ability to take care of property taxes owed, and there was a demand made for payment a week ago to be cured within four days. This simply could not be met within the means, and so here we are."... Meanwhile, Paul Minor happily reports the Hole in the Wall has once again opened its arms to live music. "We've gotten the green light from the new owners to book music every night," proclaims the Free for All-er, who kicked off the new paradigm last Sunday with the return of his musical franchise. Look for Tucker Livingston at this Sunday's affair and shows starting early -- 7pm, Monday-Friday; 8pm, weekends, with a midnight cutoff -- all of them gratis. "This is real good news," beams Minor. As late-great Galveston native Barry White might have said, "Let the Music Play" ...