Coupling Careers in the Fields of Bluegrass 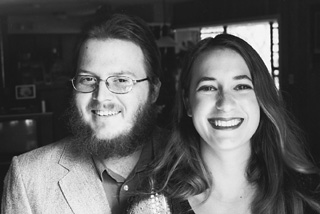 No matter which route you travel, it's an hour from Austin to Wimberley. Nestled in the Hill Country west of San Marcos, it's an antique little town of small shops and rambling dirt roads. The Blanco River cuts a path through the heart of it, adding an untamed quality that, along with a cost of living that's relatively inexpensive compared to the larger cities that surround it, makes Wimberley attractive to a number of musicians and other artistic types.

Two of those are Bryn and Billy Bright, a pair of the best acoustic/bluegrass musicians currently on the Austin music scene. She's a stand-up bass player; he plays mandolin and guitar. If you've seen Caroline Herring or Peter Rowan with a backup band in the past year or so, most likely the Brights were part of it. Their main gig these days, is their own: Two High String Band, a quartet that also features Brian Smith and Geoff Union on guitars.

Bryn is best described as petite, with a warm smile and expressive eyes. Billy is bigger, possessed of a wild red beard, glasses, and a casual demeanor that puts you at ease. It's festival season, so the Brights aren't getting much time at home these days. Currently touring the East Coast, they're promoting Two High String Band's debut, Insofarasmuch, and will soon make their way west. On a blistering June day, we caught up with them for some conversation, a dip in the Blanco, and a taste of Billy's fine home cooking.

Married since 2001, the couple shares a modest wooden cabin with their black Lab, Sonny, on one of Wimberley's dusty back roads. We gather around the kitchen table to talk about their beginnings; Bryn is originally from Livermore, an arid Northern California town, while Billy was born in Selma, Ala., and grew up in El Paso.

In the mid-Nineties, they were both attending Boston's prestigious Berklee College of Music. Billy and guitarist Smith were roommates, holding nightly jam sessions in their apartment. Bryn lived downstairs and one night was invited to join them on bass. At the time, she was Bryn Davies, attending Berklee as a jazz player, and she claims to have never heard bluegrass until she played with Billy and Brian that night. Something clicked that night: It was the beginning of Two High String Band. They got a regular gig in Boston in the fall of 1995, and playing bluegrass every Friday and Saturday night proved more rewarding than school.

After college, Davies, Bright, and Smith moved south, playing in Florida and then Colorado before setting down in Austin. Besides having family here, Billy was attracted to the Central Texas music scene through his affection for acoustic bands like the Bad Livers and the Asylum Street Spankers.

"I always thought Austin was a great place to live," he explains. "It seemed like there might be people who'd be interested in hearing the kind of music I wanted to make. It seemed like there was an opening for us, you know? We landed here and decided to stay."

Suddenly, Sonny bursts into the room demanding attention, so it seems like a good time to visit the great outdoors. We walk for a few minutes in the dry heat to the Blanco River, down an incredibly steep set of rusty stairs to a spot under a huge cypress tree. It's a postcard perfect spot, mild rapids, sun-bleached rocks, and everything else glowing shades of green. The water is exactly the refreshment we're all looking for, and Sonny can't get enough of chasing sticks and looking for fish.

Afterward, Billy grills some steaks. We eat fajitas with his freshly made tomatillo salsa and compare spaghetti-sauce recipes. This is how the Brights spend their downtime. After long stretches on the road, slack is vitally important.

The big difference between the Brights and almost everyone else playing bluegrass around these parts is that the pair has played with most of the living legends of acoustic music. For that, they can thank their friend Peter Rowan. Running into the renowned picker, both here in Austin and on the road in California and Colorado, the Brights ended up sharing their fleet fingers with him at the Old Settler's Music Festival in 1999. By fall they were his regular band, now known as the Texas Trio.

"It's been amazing," nods Billy. "With Peter, we've gotten to play on the Grand Old Opry -- twice. We've also done a bunch of shows with people like Jerry Douglas, Sam Bush, Bela Fleck, Vassar Clements, and David Grisman. A real highlight for me was when we were joined one night by J.D. Crowe.

"And the 'Jamgrass Tour' we did last summer was like being at summer camp. We played 35 cities with Peter, Tony Rice, the David Grisman Quartet, Yonder Mountain String Band, Sam Bush and his band, and John Cowan's band."

Bryn recently recorded with Old & in the Gray, a reunion of the original Old & in the Way all-star jamgrass band, featuring Clements, Rowan, and Grisman, with Herb Pedersen filling the banjo spot originally held by Jerry Garcia, Bryn fills in on bass for the late John Kahn.

"I was never really invited to play with them," she explains. "Peter just said, 'We've got this thing going on, and I think you'd be great for it, so let's just do it.'

"It sure was nice to fall into something like that," she adds with a smile.

Now, however, the Brights are making Two High String Band a priority.

"In the long run, that's what Bryn and I have always wanted to do," says Billy. "We figured we'd play with Peter, learn some, meet some people, then go on from there. It's been four years, and we feel it's time to be on our own."

Their timing is seemingly perfect. Currently, the Central Texas bluegrass scene is in full bloom. With the Meat Purveyors, South Austin Jug Band, Weary Boys, Cooper's Uncle, the Onion Creek Crawdaddies, and others playing on a regular basis, local bluegrass fans have plenty of field to mow.

Combined with the fact that jam bands -- mostly from Colorado, like the Yonder Mountain String Band, String Cheese Incident, and Leftover Salmon -- can sell out any venue they choose, and the overall national scene is surely as lively as it's ever been.

Before any bluegrass purists take exception, yes, it's a stretch to call some of this music bluegrass. Let's say, instead, that some of it is simply bluegrass "informed," and if some folks associate the darling and insipid Nickel Creek with the term, any of the above are more than worthy as well. As Billy Bright says, "There are a lot more bluegrass 'options' every week than there were before, and I'm glad to see it that way."