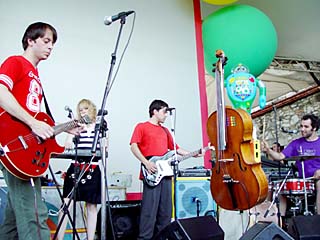 Stubb's, June 11 On a night that showcased the reedy grasping of a musical has-been trotting out her greatest hits to a marginally interested crowd and the theatrical visual bombast of a hard-working band that should know better, the Starlight Mints turned in the best performance at Stubb's bursting back yard. The Norman, Okla., openers put on a 10-song opening set composed primarily of tracks from their new release, Built on Squares, which is a quirky pop prize devoted to the art of playing with silly-slinky sounds, both musical and linguistic. This translated nicely to a live setting, and while there didn't seem to be many Starlight Mints fans in the crowd at the beginning of the set, they either trickled in or were quickly converted over the course of 40 minutes. The rest of the bill was disappointing, especially compared to the Mints' note-perfect performance. Liz Phair pandered to the lukewarm crowd, hungry for the recognition she craves after being off everyone's radar for five years; the murmurs among the masses suggest she should've just stayed away. The Flaming Lips were all style and no substance. The extravagant and playful visual elements were fun and all, but the ostentatious presentation suggests an attempt to disguise the fact that there wasn't much of interest happening musically. The rhythm section did the heavy lifting while the keyboardist piped in canned tracks and Wayne Coyne donned Hulk hands, played with puppets, and threw confetti. It's time for those Okies to take a break and rediscover music. The next day was a real treat for Starlight Mints fans; after their lunchtime set on KUT, the fivepiece crowded Waterloo Records' in-store stage for a surprisingly well-attended afternoon set. The set list didn't vary much from the night before -- in fact, it was basically a shortened version -- but the crowd was bopping along happily nonetheless. The group, headed home after this, the last show of their current tour, closed the set with the dreamy, mysterious "Zillion Eyes," which is fitting, considering that not too long from now, all eyes may well be on them as the next It band.