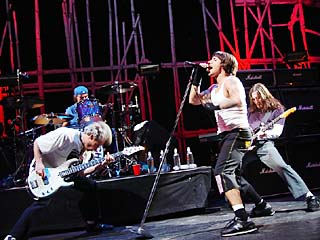 Verizon Wireless Amphitheater, Selma, Texas, June 13 "All around the world, we could make time, rompin' and a stompin', 'cause I'm in my prime." Who would've believed that more than 20 years after Anthony Kiedis, Michael Balzary (Flea), and original guitarist Hillel Slovak were aspiring romper stompers in a SoCal high school that the Red Hot Chili Peppers would be at the very peak of their game. Proof? On a storm-lashed Friday the 13th, while most South and Central Texas prayed the tempest wouldn't black out game five of the Spurs/Nets Finals, thousands of drenched fans thundered inside the Lone Star shed that is the Verizon Wireless Amphitheater. By the time Kiedis sang the first line of "Around the World," after openers "By the Way" and "Scar Tissue," the RHCP were their white-hot lightning rod. Leaving the same sort of electrical snail trail Mother Nature was scratching across the terrible night sky, the quartet matched the torrent blow for blow. Kiedis' frontman punch; Flea's bleached, curly Harpo Marx bass antics; the drum-riser command of Chad Smith -- all flowed into guitarist John Frusciante. If heroin casualty Slovak was the band's Brian Jones, Frusciante is their Jimi Hendrix. On last year's insidious By the Way, Frusciante geniuses tones and harmonies that would lobotomize Brian Wilson. It's the Peppers' Pet Sounds, Frusciante the ghost in the machine of every RHCP LP that matters; just as his debut on Mother's Milk laid the lactose for Blood Sugar Sex Magik, his return for 1999's Californication presages By the Way. The latter two albums comprised almost all of the set list. After Flea's post-"Around the World" shout-out ("Hiya Gibby," he cried, pointing out the Butthole Surfer in the orchestra pit. "Howya doing everybody? I've got a big dick. It's big!"), Frusciante took control. While "The Zephyr Song" didn't bring the gale that whirlpooled around the Verizon toward the end of the two-hour concert, it sailed on the guitarist's delicate glint. His screaming solo for "Parallel Universe," which segued into his high-pitched wailing of Donna Summer's "I Feel Love," was rightly punctuated by a streak of lightning. "Don't Forget Me" matched Kiedis ("I'm an inbred, and a pothead -- two legs that you spread inside the tool shed") against his instrumentalists, and as with the entire show, not to mention the RHCP's 2000 Erwin Center showing, they locked down like nothing less than John Coltrane's classic quartet. Completely, telepathically. The stop-time stomp of "Right on Time" and "Can't Stop" -- as tight as opener Snoop Dogg's was distorted with volume. God's own sneeze blew out the evening squall during the psychedelic swirl of "Venice Queen" just in time for closer "Give It Away" and encore "Under the Bridge" and "Power of Equality." When they were done, the Spurs had won, the heavens had cleared, and all was righteous in the Republic.