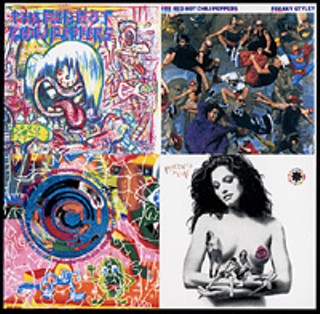 When they came clowning out of Hollywood on 1984's The Red Hot Chili Peppers, hardly anyone would've pegged this daffy, funk-obsessed bunch of weirdoes as some of the most influential musicians of their generation. Mainly because they sucked. However accomplished he's become, Flea's slap-bass technique on "Baby Appeal" and "Get Up and Jump" is not a pleasant experience. The rhythms, meanwhile, are both forced and erratic. Their debut confirms the Peppers have indeed always been more about James Brown than Bad Brains, but in the most slapdash, disjointed way possible. Basically, it's a mess, but by 1985's Freaky Styley, they were vastly improved. Flea and original drummer Jack Irons synced up, while guitarist Hillel Slovak, who sat out RHCP, brought an assured yet easy touch to punk chargers ("Catholic School Girls Rule") and funk workouts ("American Ghost Dance") alike. Besides covering "If You Want Me to Stay," the Chilis take Sly Stone to heart and construct something much tighter and more musical without sacrificing any of the first album's rampaging id. "The Brothers Cup" and "Sex Rap" find Anthony Kiedis at last channeling his hormones into a cohesive flow, and slow-cooker "Yertle the Turtle" is laid-back and saucy. Still too many horns, though. On 1987's The Uplift Mofo Party Plan, producer George Clinton's influence bleeds through (the languid "Funky Crime") even as the band moves into more brazen rock zones on "Fight Like a Brave," "Backwoods," and "Walkin' on Down the Road." "Behind the Sun" is their best Hendrix imitation yet, and "Special Secret Song Inside" (aka "Party on Your Pussy") captures the Peppers in all their lascivious glory. Not far behind the Beastie Boys' Licensed to Ill in sheer male exuberance, Uplift Mofo is four men on the verge of getting it on. This they managed to do despite Irons' departure and Slovak's heroin death, recruiting drummer Chad Smith and guitarist John Frusciante for the tremendous, barely contained Mother's Milk. Skin-tight, psychedelic, and L.A. to the core, the album ranks alongside Jane's Addiction's Ritual de lo Habitual and the Pixies' Doolittle as the cream of late-Eighties alt-rock. "Taste the Pain" and "Knock Me Down" are lights-out funky, while a kaleidoscopic cover of Stevie Wonder's "Higher Ground" is their first true classic, and the smoldering "Sexy Mexican Maid" a horn-dog's delight. "Good Time Boys" packs a devastating Aerosmithian swagger, "Pretty Little Ditty" presages later mega-hits like "Scar Tissue," and "Johnny, Kick a Hole in the Sky" ties it all together in a sweeping, rapid-fire electric-boogie package. Immense. Next would come "Give It Away," worldwide superstardom, rotating guitarists, and finally latter-day masterpiece By the Way, but it's on these four albums -- reissued here and fleshed out with numerous bonus tracks -- where the Red Hot Chili Peppers became the spastic, secretly sensitive party hounds America grew to love. Even if the first one is still awful. (The Red Hot Chili Peppers, with special guest Snoop Dogg, play the Verizon Wireless Amphitheater Friday, June 13.)