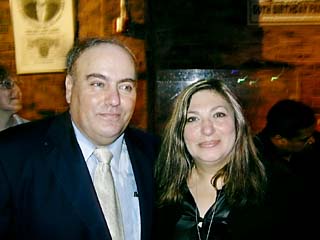 "Off paper" is a term employed by the Texas Department of Criminal Justice to denote when one of its former guests has fulfilled his or her parole-based obligations. Monday night, it meant Clifford Antone could once again patronize the club bearing his name, and as expected, a party broke out. Threadgill's jefe Eddie Wilson got his boots buffed, Texas Monthly Publisher Mike Levy danced like Elaine from Seinfeld, and a handful of San Antone old-timers made the room feel like 1958. Susan Antone, marveling, "I recognize everyone here -- it's like a different club," palled around with state Rep. Ron Wilson, D-Houston, who later sat in on bass. On hand to welcome Clifford back to his rightful stageside post were the West Side Horns, featuring tantalizing tenorman Spot Barnett, special guest vocalist Andrew Coy, pianist Gene Taylor, B-3 behemoth Sauce Gonzales, and the usual Blue Monday Band regulars including Derek O'Brien and George Rains. "It's showtime," announced Clifford around 9:25pm. "We might go all night like the old days." Antone also brought Direct Events capo di tutti capi Tim O'Connor on stage, thanking him for DE's assistance in keeping the club's doors open earlier this year: "Without 'em, we wouldn't be here today." Direct Events' Mark Collins, now responsible for booking Antone's, said he was pleased with the venue's recent performance. Joe Ely, booked for a July 10 fundraiser for Clifford's East Austin foundation, turned up and revealed that his next solo album, Streets of Sin, is due next month on Rounder. His other band, the Flatlanders, is three weeks shy of finishing the follow-up to last year's Now Again; New West will release that one in the appropriate number of months indicated by a smile and a shrug. Around midnight, Jane Bond and boyfriend/bandmate Mike Keller popped in the club, and then back out and around the corner. In the alley, Bond admitted she's chomping at the bit to record new material and splitting town for a Nashville vacation. (Coincidence?) Then she went in to party, and "TCB," finally "off paper," went home to sleep.

Blow Up Your Video

Despite their ongoing oblivion to what a jackpot a reality series based on the life of an Austin music journalist would be, the folks over at the Austin Music Network believe their channel is too precious a cultural resource to go belly-up come next budget year. To help get the word out -- and begin beating the bushes for open checkbooks -- the net threw a little soiree last Friday at its brand-new headquarters at the old airport. Supporter/City Council Member Jackie Goodman, ex-mayoral candidate Max Nofziger, the ubiquitous Eddie Wilson, former Liberty Lunch owners Mark Pratz and J'Net Ward, and a few broke-ass writers all showed up. Music Commission Chairman Kevin Connor offered a preview of the new In Austin program, an Entertainment Tonight-style magazine AMN hopes will usher in a breezier, more-stylish look, and more importantly, willing and generous underwriters. In Austin premieres tonight at 5pm, the first in a volley of programming changes to come in the ensuing weeks. Look also for the daily Hot Box and Bounce/MegaHipHop, a weekly team-up with Mega 93.3FM. Program director Jenn Garrison says the network wants to evolve into an entity similar to Canada's MuchMusic, the idea being to "treat it more as an avenue for tourism and economic development." One way, she says, is more videos and less static concert footage and generally acting as a nexus for aspiring musicians, filmmakers, and editors.

Are You the Keymaster?

Anyone familiar with a keyboard and grade-A prickly pop songs will want to get in touch with Britt Daniel posthaste. Sir Spoon is "scrambling" to find a replacement for key maestro Kevin Lovejoy before heading back out on the road next month. When not perusing the Chronicle musician exchange, Daniel has been producing the debut EP for Factory-tough Austin quintet I Love You but I've Chosen Darkness. The EP, which Daniel says "turned out really well," should be out on Emperor Jones before summer's end. See what they've been up to tonight (Thursday) at the Mercury, where This Microwave World splits a bill with Daniel and Darkness. Meanwhile, Lovejoy's greener pastures turned out to be Hotel Paper popstress Michelle Branch, who hits San Antonio's SBC Center and Houston's Compaq Center with the Dixie Chicks July 29 and 30. Local drum dynamo J.J. Johnston will also be spending his summer in the sheds as one of John Mayer's hired hands. 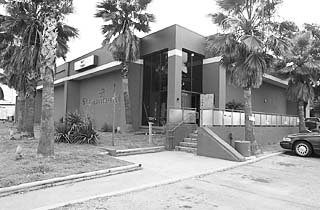 HELLO (AGAIN): Hole in the Wall. The Hole marks both its three-week and 30-year anniversary starting tonight (Thursday) with more than a week of free shows. All the usual suspects -- Horse Wreck, Ted Roddy, Mike Nicolai, Damnations, Li'l Cap'n Travis, Golden Arm Trio -- will be on hand to help test the club's new two-to-three-band-per-night booking policy. An old policy in effect this Sunday will be the return of Paul Minor's Free for All, which features Matt Hubbard, Moonlight Towers, and Minor's own Superego All-Stars. Since everything is a trial run at this point to show the new owners that live music is still viable on the Drag, check the club listings and go twice.

Citing financial reasons, Steamboat owner Paul Oveisi announced Tuesday he was closing up shop on the 2003 Austin Music Awards' "Best New Club" effective this weekend. Oveisi said both the business and the building at 100 E. Riverside (which many people think is cursed as it is) are "replete with debt," and the prospect of the new smoking ordinance on top of an already-slow summer was just too much to bear. Having taxed both his credit cards and marriage to the limits, he says he's trying to put as positive a spin on the situation as possible and hopes to reopen in the future under more favorable economic circumstances. Oveisi will continue to operate Momos, upstairs from Katz's. Helping close down Steamboat (again) this weekend are Del Castillo, Vallejo, and the Scabs.

Barring one of those last-minute political horse trades that usually end in some sort of scandal -- which is not to say it wouldn't be a beautiful thing -- the ordinance banning smoking in bars and nightclubs looks set to pass its third and final reading at today's City Council meeting. What shape the new law, which as proposed basically outlaws smoking in any public place that hasn't found a way to exempt itself, will assume is still anybody's guess. Nevertheless, taking a few puffs while enjoying a cold beverage or hot band is likely now part of Lost Austin. Having tried petitions, pledge drives, and personal testimonials, local bar owners are now to the point of throwing up their hands and praying people keep going out. Please do. Here's a few ways nicotine-addicted music fans can get through those long, lonely hours between trips to the curb.

Those delicious, flavor-packed hard candies curb that oral itch and last three times as long as a cigarette anyway.

PACIFIERS: Borrow one from your neighborhood rave kid. For extra kick, soak in Vicks Mentholatum before using.

HOUSE PARTIES: The amount of home studios in the Austin area could spark a backyard boom not seen since the mid-Eighties heyday of places like the Lodge. Too bad about all those sleeping neighbors ...

EAT YOUR ROCK & ROLL: Should clubs begin to close, get ready for more of your favorite eateries to pick up the slack by booking bands. Don't trip over the bassist on your way to the bathroom.

BLAZE ONE UP: In at least one exasperated, anonymous club owner's interpretation of the law, smoking tobacco in public will now carry a stiffer penalty than smoking marijuana.

SMOKE ANYWAY: After New York City's ban went into effect, the New York Post ran a story that the NYPD had a total of 10 officers across the five boroughs charged with enforcing the new law -- all of whom went off duty at 11pm.

Yes, it's good to see Willie Nelson back in Billboard's Country Top 10 with "Beer for My Horses," but as occasionally occurs (er ... Rob Thomas?), his choice of duet partner is somewhat lacking. Not because Toby Keith has been less than gentlemanly toward Natalie Maines, or even because he's a Sooner, but because Keith's "Who's Your Daddy?" video puts only one degree of separation between Willie and cornpone crackpot Cledus T. Judd. Unbeknown to many, Nelson and Keith's hit collaboration went through several name changes before the duo arrived at its final, ASPCA-alarming title.

"An Outlaw Ain't Nothin' but a Paycheck"

"My Heroes Have Always Been Assholes"

"Mammas Don't Let Your Babies Grow Up to Be Fascists"

"Ain't It Funny How Credibility Slips Away"

"Are You Absolutely Sure Hank Done It This Way?"

"Angel Flying Too Close to the No-Fly Zone"

Quotes of the Week

-- Derek O'Brien, on how many times he's played "T-Bone Shuffle"

-- Would-be Spiros patron, less than impressed with the DJ's choice of Lil' Keke