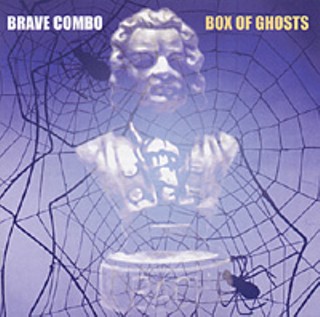 Box of Ghosts (Rounder) For 24 years, Denton's Brave Combo has proven you can successfully engage in musical anthropology without checking your sense of humor at the door. Appropriately, the group's latest has its origins in a late-night TV infomercial for an album of familiar classical themes. Modern reinterpretations of classical themes are nothing new, of course, but Brave Combo's learned kookiness is always sure to take the familiar to new places. Starting with a rollicking polka version of Mozart's "Rondo a la Turca," Box of Ghosts plows through 15 compositions, maintaining an eclectic approach without compromising the timeless melodies. Satie's "The Gnossienne #3" is given a futuristic disco treatment reminiscent of the nonstop-dance medley discs you find at Asian markets, while Ponchielli's "Dance of the Hours" (aka the music behind Allen Sherman's "Hello Muddah, Hello Faddah") is recast as a cha-cha. Doing Chopin's "Waltz in C Minor" as a jazz waltz creates an air of dizzying tension that would be perfect for a car-chase scene through cobblestone streets. Combo leader Carl Finch contributes a soaring, romantic vocal to the group's salsa version of Dvorák's "Slavonic Dance," which is second only to their (relatively) straight reading of Puccini's "Musetta's Waltz" for sheer wedding-day beauty. Box of Ghosts ends energetically with a live twist version of "Habanera" from Bizet's Carmen that captures the inherent party atmosphere of a Brave Combo show. This probably won't move as many copies as K-Tel's Hooked on Classics series, but who knows what might happen if Brave Combo got their own infomercial? (Brave Combo plays Threadgill's WHQ Saturday, June 7.)