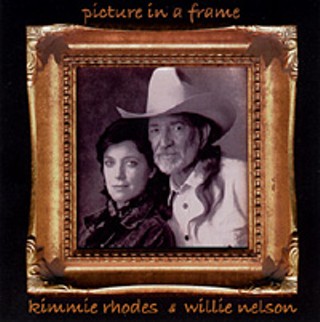 Picture in a Frame (SBD) Ever have a picture that didn't quite fit in its frame? Picture in a Frame is caught between a caulk and an empty space. That the leadoff track -- the title song, no less -- falls flat is the first sign of a bad fit. Kimmie Rhodes, whose voice is as light as a feather, doesn't float through the mix as she should, she stands. Willie Nelson, a frequent duet partner over the years, walks through another vocal performance for his part (for the balance of the disc actually), and the fact that it's a Tom Waits song does redeem it. That buoyancy puts in an appearance on the follow-up, "Valentine," but this time, the tune's rote acoustic backdrop begs for a pinch of Stardust on this joint Willie/Kimmie production. "Contrabandistas," the best duet here, evinces just such a pixel or two. "Love Always Will Be" and "Just One Love" don't. Rhodes' "I Just Drove By," meanwhile, hits the pothole of Willie's wobbly vocal. Even "Love Me Like a Song" and "We've Done This Before," both from Rhodes' most recent album, last year's down-soft Love Me Like a Song, lose a bit of their luster in this context. The whole of Picture in a Frame could use more pixie dust, because while there may be no major flaws, neither does it sparkle with the magic both artists are capable of -- together. The glittering closer has the right idea: "Rhinestone Highway."