Come Go Home With Me

Tweet
print
write a letter
Toward the end of Down in Houston: Bayou City Blues (UT Press, 2003), author Roger Wood observes that "no public space in this city that Lightnin' Hopkins called home even acknowledges the existence, much less the cultural importance, of its arguably most historically significant musician." Similarly, there's no Johnny Clyde Copeland Memorial Park, no Albert Collins Elementary School, not even a historical marker where the offices of seminal record label Duke-Peacock once stood.

Unlike Chicago, Memphis, New Orleans, and even Austin, which continue to profit handsomely off their reputations as sacred musical ground, Houston has always glossed over its heritage -- if not ignored it altogether. Yet the fact remains that Texas' largest city is home to a rich musical legacy matched by few others, one that extends far beyond familiar names like Hopkins, Collins, Copeland, Johnny "Guitar" Watson, and Clarence "Gatemouth" Brown. And as Down in Houston documents, it may be entering its sunset years, but the scene is still very much alive.

The seeds of Down in Houston were sown at a 1995 academic conference at Arkansas State University, where Wood, an English professor at Houston Community College's Central College, met Chicago-based photographer James Fraher. Wood, who had steeped himself in Houston's blues culture ever since reading Lightnin' Hopkins' 1982 obituary, wanted Fraher to add some Texas faces to his "The Blues Is a Feeling" exhibit. Their collaboration turned into two Houston-centered issues of Living Blues magazine, and soon after, the two realized they had more than enough material for a full-fledged book.

"I wanted to focus the book not so much on profiles of individual artists, which is what most blues books do, but on places," says Wood, 47. "To make it less like a slide show and more like a film."

Down in Houston takes place in areas far removed, culturally if not geographically, from the shimmering skyscrapers and sprawling suburbia that mark the city in most people's minds. Immediately southeast of downtown, the Third Ward was home to both the high-class El Dorado Ballroom and low-down juke joints like Shady's Playhouse, while musicians still gather for weekly jam sessions at Miss Ann's Playpen, the El Nedo Cafe, and Etta's Lounge. On the near northeast side, the largely Creole-settled Fifth Ward has been pumping out some of the best zydeco anywhere since the Fifties at places like the Silver Slipper, Mr. A's, and the now-closed Continental Zydeco Ballroom.

Also in the Fifth Ward rests what was once, more than any other, the engine driving this fertile scene: the offices of Duke-Peacock Records, brainchild of controversial African-American entrepreneur Don Robey. In its Forties and Fifties heyday, the label was home to some of the most prominent figures in blues and R&B: Bobby "Blue" Bland, Junior Parker, Big Mama Thornton, and the "late, great" Johnny Ace.

Far more important to Houston was the roster of backup musicians and session players that kept plying their distinctive Texas sound around the city long after Robey sold the label to ABC/Dunhill in 1973: Teddy Reynolds, Big Walter "the Thunderbird" Price, Clarence Hollimon, Texas Johnny Brown, Grady Gaines, Calvin Owens, Pete Mayes, Joe "Guitar" Hughes, and dozens more. Some continue to perform to this day, although the passage of time has already stilled many voices; Hughes passed away May 20 at age 65. When the last are gone, an important chapter of American musical history -- one that most people never even knew existed -- will be closed for good.

"What I see is akin to a sunset," says Wood, who took us on a guided tour of his book's landmarks, detailing their history all the way. "And the best you can do is say, 'Hey, all you folks inside watching TV, get out here and experience this glorious thing, because when it's gone, it's gone.'" 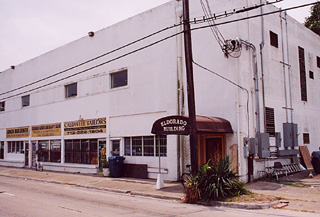 "The El Dorado was created in 1938 by a woman named Anna Dupree. Through the Forties and into the Fifties, the El Dorado was a major venue for touring artists -- T-Bone Walker, Big Joe Turner, Ray Charles. They also had talent shows. The talent shows were real popular. The first time Joe 'Guitar' Hughes ever played in public was at an El Dorado talent show. Johnny 'Guitar' Watson, most people don't know he started out on piano. He played the talent show when he was a kid. They said they had to put telephone books on the piano bench so he could reach the keys. I think that for folks in the Third Ward, and all over black Houston, the El Dorado represented a place where you could dress up and have a high-class good time." 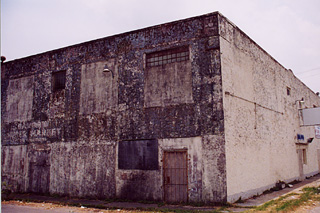 "Shady had live music seven days a week. To me, Shady's is the antithesis of the El Dorado. The El Dorado was a class venue for people with money to spend and people who are gonna dress nice. Shady's was, as Teddy Reynolds said, 'Come as you are, because you're gonna get sweaty, funky, dancing anyway, so no sense getting dressed up.' People would be there in their work clothes; it wasn't a dress-up thing. During his prime, when he was really developing as a player, Joe Hughes played nine gigs a week here. The Blue Monday jams here are legendary among Houston musicians." 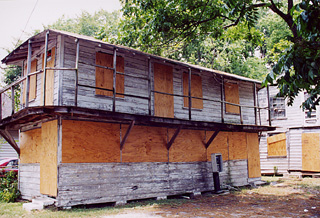 "[Until last year], that was a working barbershop that had been there forever. Upstairs was an apartment, and Albert grew up right there." 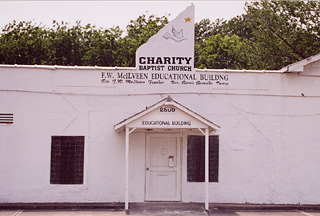 "That crest sticking up had a neon peacock that was all lit up at night, and that little entryway, that's the original entryway to the club. From everything I can tell, the only thing that's changed about this building is the paint, on the outside at least. [Don Robey] eventually closed the Bronze Peacock and just moved his whole record operation into there. That's where music was recorded that was important in its own right, but later covered by people like Elvis Presley, the Grateful Dead, Three Dog Night, Stevie Ray Vaughan. 'Texas Flood' was first recorded by Fenton Robertson right there. Then if you forget blues and start looking at gospel, this was where the Dixie Hummingbirds were recording even though they lived in Philadelphia. This is where Roy Head cut 'Treat Her Right.' It's amazing." 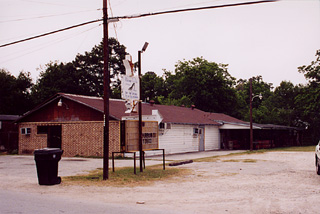 "Right here, this house across the street with the aqua-colored trim, that's where Alfred Cormier lives. He created this club. He still lives there, and Curly, his son, runs the place. Back in the Fifties and early Sixties, Clifton Chenier frequently played here. This is the place where Clifton and Lightnin' Hopkins were. Many people have told me about seeing Clifton and Lightnin' just doing a duo thing. It's a Creole place, so you think mainly zydeco, but it definitely had a blues element to it. Curly was actually in a band that backed Al Green for a while back in the Sixties, so you can see where he's coming from musically there." 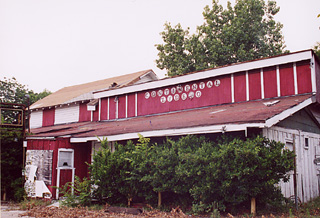 "We are in what's left of Frenchtown. Doris McClendon ran this place till the day she died in 1997. Doris McClendon was a saint. She did more to popularize zydeco music, particularly with outsiders. I'm happy the building's still here, but I've never seen it in this state of disrepair. There's a lot of these little nooks and crannies and little rooms within rooms. Really cool place to come party. Whenever I had friends in from out of town, if they wanted to go out, I loved to bring 'em here. They had never seen a place like this. The music, the friendliness, the layout of the club was so amazing." 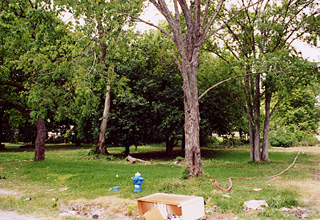 "On this front part of the lot, you had a large-size house that had been stripped of all its interior walls and turned into, for lack of a better word, a juke joint. On the lot beyond that, you had [several] tiny, tiny, shotgun shacks, and those houses were rented out to anyone who would pay the rent. Musicians would often, if they didn't have another place to stay, live in what many of them called the 'motel.' James 'Widemouth' Brown, who was Gatemouth Brown's older brother, was living here and was kind of the guitar mentor for Joe Hughes, Albert Collins, Johnny Copeland, Johnny Watson. Johnny Watson lived a few blocks back over at the time. It was a very relaxed, come-as-you-are place to go hear music and have fun. You could come in barefoot and dirty, and no one's gonna give you any crap." 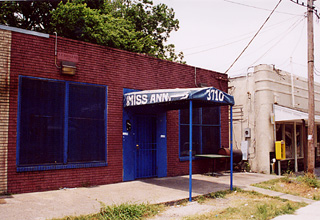 "I'm really glad Miss Ann's is here. Bobby Lewis has a band called Bobby Lewis & the Invaders. He decided, 'I'm gonna open me a place where I can sing when I want, and instead of me having the club owner cheat me, I'll be the club owner, and I'll be the one making money off all that beer we sell when I sing.' Bobby decided the way to get his club going was to go back and recreate the old Blue Monday jams. I saw Johnny Copeland in here. When he was in town back in like '96, he came in here, and he was like, 'Man, I remember the Blue Mondays at Shady's. It's great to see y'all got this going.'" 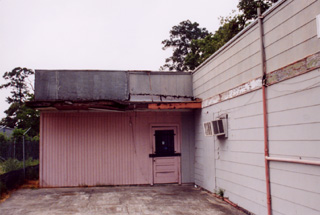 "Colby and Etta have had this business here for a long time. On this side, it's a little grill, and on that side, it's a barbershop. At some point, they had this room in the back, and they opened it up and started having music in there on Sunday nights. Milt Hopkins was the one that started off there. Eventually Milt gave that gig to his good friend Grady Gaines. And Grady Gaines, whose career goes back to the early days of Little Richard, Grady plays there every Sunday night. It features Grady's band, a big band with lots of different players, but guests come and sit in all the time, too." 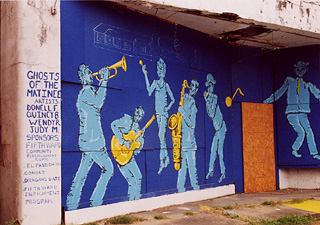 "When I first started coming over here, this was a vacant lot. But they've got these cool murals that show Fifth Ward history. This one is just anonymous musicians. [Down the block] they have specific faces like Joe Sample, Barbara Jordan, and George Foreman, famous people who came out of this neighborhood." 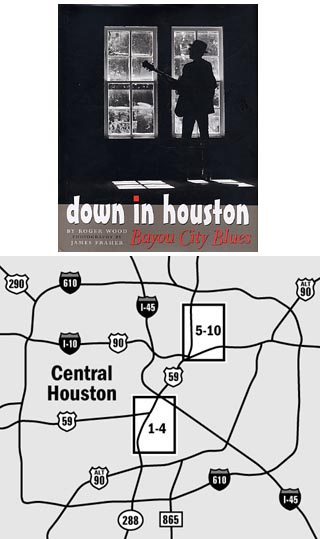 'Down In Houston' Tour Map