The Hole in the Wall and the Motards return, and things get smoky at City Hall 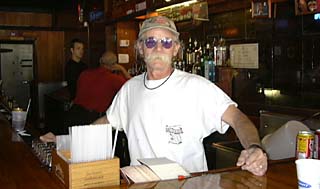 Considering all the fanfare and hand-wringing that accompanied the Hole in the Wall's closing last June, it's appropriate that the venerable bar at 2538 Guadalupe reopened last Friday night almost completely under the radar. That's not a misprint: The Hole in the Wall is indeed open for business once again, a development that comes as almost as much of a shock to management as the public at large. "We opened practically overnight," says general manager Matt Allen, pointing out that as of Friday afternoon, the club lacked carpet, a jukebox, pinball machines, and most importantly, booze. Miraculously, all those materialized one by one throughout the day, and by 8pm, drinks were being poured, and word was rapidly spreading. By Sunday night, musicians were showing up wondering if there was going to be a Free for All. Not as of yet, though Allen says he and Paul Minor are "in talks." It will be a few more weeks before music returns to the freshly carpeted, kitchenless Hole, as Allen has barely had time to sleep, let alone book bands. "We're moving slow, and will be moving slow for a while," says Allen, adding that the Hole is likely to start slow with the music, two or three nights a week at the outset. "There's no reason to dive headfirst into this." For now, patrons will have to be content with $5 pitchers of Lone Star, free shuffleboard in the back room, and a jukebox featuring Willie Nelson, ZZ Top, Neko Case, the Meat Purveyors, T. Rex, and Pavement. "It feels so good," affirms day manager/bartender Brooks Brannon. "It's hard to explain -- like wandering around in the dark and the light comes on."

Zero hour is rapidly approaching for Austin's bars and nightclubs vis-à-vis the city's proposed smoking ordinance, which passed its first reading at the May 8 City Council meeting. Barring a last-minute reversal by one of the three council members who voted for the ban last time -- Daryl Slusher, Betty Dunkerley, and Danny Thomas -- the ordinance could become final as early as tonight (Thursday), when the second reading is scheduled. If the ordinance passes the second reading, the council could immediately conduct a third reading, which would then presumably pass. Since the first reading passed with amendments exempting bingo parlors, billiard halls, and fraternal organizations (e.g. VFW halls), many club owners believe the council's actions are motivated more by politics than public health. "Workers [in those places] are not magically safer," says Beerland proprietor Randall Stockton. "Those places have been protected by some political action." Stockton adds his belief that the general public is unaware the ordinance extends far beyond bars and music venues -- that it would in fact make it illegal for Austinites to smoke anywhere outside their dwellings, including their cars and even their back yards. Elysium's John Wickham says downtown business owners have been pursuing a three-pronged plan to head the ordinance off at the pass: making their patrons aware of the ordinance's full implications, meeting with council members to discuss a compromise, and speaking with attorneys about legal recourses. With other cities that have passed similar measures finding themselves stripped of between 25% and 40% of bar/nightclub revenue -- a figure that amounts to around $180 million a year in Austin -- local residents, both smoking and non-, could find themselves feeling the effects should Austin's pass. "There's only two ways for the city to raise money: property taxes and sales taxes, and bars pay more sales taxes than any other business," Wickham says. "If the city loses that money, they'll have to make up for it in some way." Reading of the item, will be sometime after 2pm at the council chambers, 3700 Lake Austin Blvd.

Days of Future Past

Back in the mid-Nineties, the closest thing to a sure thing in Austin was a Saturday night with the Motards. "I just remember endless shows at the Blue Flamingo that were completely violent and out of control," recalls ex-'Tard Toby Marsh, "but I hate to glorify something that was so god-awfully horrible." Although the quintet -- bassist Marsh, singer Johnny Motard, drummer Suzanne Bishop, and guitarists Paul J. and Dave Head -- was only together four years, they left a lasting impact on Austin's punk rock community. Once the group splintered, the various members ending up serving time in bands like the Secret Lovers, the Putdowns, Hatchbacks, Teen Cool, the Ritchie Whites, River City Rapists, and Pink Swords. Marsh's Mortville Records, meanwhile, has released music from, among others, the Chumps, the Reclusives, the Cruel & Unusual, Slum City, and the Ends. Not a bad legacy for a band that was lucky to make it out of clubs alive. "There were lots of trips to the hospital after shows," sighs Marsh. During their 1993-1997 life span, the Motards released two records and survived several tours where, Marsh remembers, they were carjacked in Spokane, ripped off in Reno and Kansas, almost paid not to play a house party in Auburn, Ala., and endured a Corpus Christi show where "a fight broke out every five minutes." Now comes Mortville's Stardom, a CD that collects rarities like the group's first single and a never-before-released 1994 session recorded with Tim Kerr. Far enough removed from their rancorous breakup that Marsh says "we all get along fairly well now," the band will top off an inside/outside punk rock blowout Saturday at Emo's with USS Friendship, the Putdowns, Ignorance Park, Pink Swords, Marsh's hardcore cover band Mangyna, and Zeke holdovers Camarosmith. "Since we've all been in other bands, we're all much better musicians now," laughs Marsh. 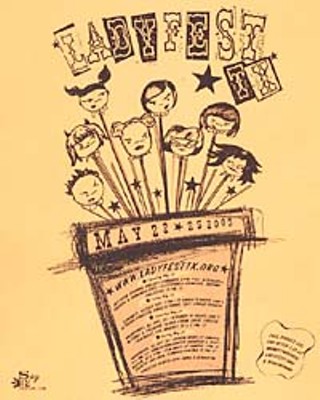 Luck Be a Lady

After nine months of planning, Ladyfest Texas makes its debut this weekend at venues all over Austin. Ladyfest began in Olympia, Wash., 2000 and has spread to over 20 locations in the U.S., Europe, and Australia. "Our focus is the difficulties and challenges facing women, especially in punk rock," says Kim Francis, one of Ladyfest Texas' organizers. "We're going to create our own space for a community of female artists to showcase talent that might get overlooked otherwise." The film festival component of Ladyfest is Saturday at the Hideout, with screenings of documentaries by local directors, as well as Don't Need You, a 45-minute look at the evolution of the riot-grrrl phenomenon that gave rise to Ladyfest. More than 40 visual artists will exhibit their works at an all-woman show at Gallery Lombardi, lasting the weekend and opening tonight (Thursday) from 6-9pm. Spoken-word events are scheduled for Friday and Sunday, and the musical component of Ladyfest happens Saturday at Emo's, with an early show featuring San Francisco's legendary Tribe 8, Japan's Mummy the Peepshow, locals Coco Candissi, Ainjel Emme, the Tuna Helpers, and more (see "Music Listings"). Wristbands good for admission to all Ladyfest events are available for $35 at MonkeyWrench Books, Book Woman, and at www.ladyfesttx.org. The Web site also contains more information on the all-day workshops happening Saturday and Sunday at UT, everything from menstruation alternatives to "Finding Your Inner Rock Star." "One of our main objectives is to inspire women and young girls to contribute artistically," Francis says, "and empower them to become creators of art instead of consumers."

Several high-profile musicians lend their talents to a pair of benefits for eminently worthy causes next week. Wednesday, May 28, at the Backyard, Ray Benson, Jimmie Vaughan, Bonnie Raitt, and "Miss Rhythm & Blues" Ruth Brown do their part to raise money for the 2003 Rhythm & Blues Foundation Pioneer Honorees: Clarence "Frogman" Henry, Koko Taylor, the Supremes, the Del Vikings, the Dixie Cups, George Clinton, Maceo Parker, Houston native Johnny Nash, and the family of Jackie Wilson. Founded in 1988, the nonprofit foundation provides financial support for R&B and Motown musicians from the Forties through the Seventies. Benson, who organized the benefit and sits on the foundation's board, has a solo album, Beyond Time, due next month. Tickets start at $35. The next night at La Zona Rosa, Texas heroes Delbert McClinton and Marcia Ball join Canadian singer-songwriter and Austin favorite Fred Eaglesmith for the Avon Foundation's "Kiss Goodbye to Breast Cancer" benefit. Proceeds go to the Breast Cancer Resource Center of Austin, an organization started in 1995 to provide support, education, and information to women diagnosed with breast cancer, as well as their friends and families. Tickets are $50. Tickets for both shows are available through Star Tickets at 469-SHOW. Dig deep.