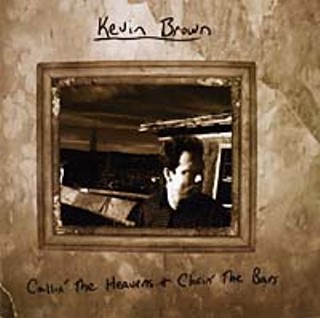 Callin' the Heavens & Closin' the Bars There are dozens and dozens and dozens of songwriters in Austin. From Alejandro Escovedo and Beaver Nelson to the Robison brothers and Jimmie Dale Gilmore, almost all of them work in that largely indefinable netherworld where twang meets rock. To stand out in that crowd, you either have to be a master storyteller or possess the charisma and chops of a shaman. Kevin Brown is neither of those -- yet. His debut, Callin' the Heavens & Closin' the Bars, demonstrates his potential, and in an age when anyone and everyone can release their own CD, that's saying a lot. Brown is no newcomer to Austin; some may know him as Kevin Christopher, or from his work with the Dustkings or NogPonJami. On this project, he's surrounded himself with some quality talent, crediting Stephen Doster with producing, John X. Reed with the arrangements, Will Sexton on bass and backing vocals, and JJ Johnson on drums. What stand out are Brown's songs and the way he puts them across. Over the course of 13 tracks, he captures a healthy range of emotions, mixing a handful of country weepers with a couple of screamers and a few gracefully captured glimpses of what happened that day. Not all are winners, but the sly amble "Coyote Cries," the eerie "My Sweet," and the hard-charging, rockabilly flavored "Wrap Up Around Me" show Brown is capable of more than most songsters, making this disc one of the best first efforts out of Austin this year. (Kevin Brown plays in-store at Jupiter Records, Friday, May 16, 7pm.)