Austin Night in the land of dreams 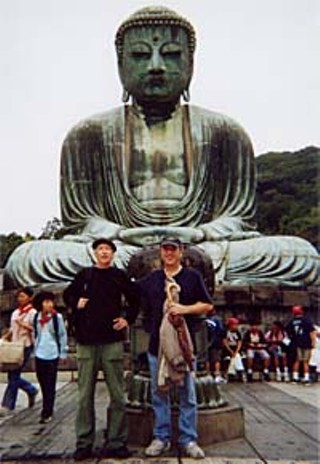 The last Sunday of South by Southwest began quietly at Gail Chovan's Blackmail boutique on South Congress. The store was recovering from a week's worth of wall-to-wall business when the two tiny Japanese women, accompanied by an entourage, walked in.

Chovan thought the girls were "adorable," but was nevertheless surprised when the group lit into a shopping frenzy, "clothes flying out of the dressing room." To top it off, their Japan-only credit cards were welcome, but not usable. "Can you get Hawaiian clothes?" one of them asked Chovan, whose shop specializes in the color black.

The two young women also charmed the store's onlookers, who had by now gathered inside and outside Blackmail. When the entourage departed, they gave Chovan a copy of the duo's CD. She chuckles that the store played the disc for days afterward and that customers constantly asked, "Who is that?" Every reply gained a new fan for the twosome.

Chovan was pleased with the business. The customers loved the excitement. Petty Booka, for their part, discovered there's nothing like a little guerilla shopping to promote your band when you're 12,000 miles from home.

Stephen Doster was in Japan last October doing a little retail shopping of his own. The veteran Austin singer-songwriter stood inside Tokyo's multistoried Tower Records -- the largest in the world -- and marveled at two window displays. One was for future Grammy winner Norah Jones, and the other, of equal size and emphasis, was for clarinet player Stanley Smith's solo album, In the Land of Dreams.

That's right: Stanley Smith of the Asylum Street Spankers, enjoying a level of popularity halfway around the world that he never received in his hometown. Doster made the journey as Smith's accompanist on tour, having produced and played on Dreams. What happened after their in-store performance made Doster almost swoon as he recounted it.

"We came out to sign CDs, and no one was waiting," chuckles Doster. "Stanley and I looked at each other like, 'Oh no,' but I saw it before he did: The crowd was roped off in a line that went out the building and around the block. We signed autographs for over an hour. Another day, we did interviews for eight hours. I've never bowed so much in my life."

"I've never signed so many CDs," he exclaims. "A Parisian-style magazine called Figaro interviewed me. I'm a 58-year-old man, and Figaro's Tokyo edition had a fashion photographer shooting me. The Spankers get a lot of press and interviews, but that was special for me."

The warm reception by the press was just the beginning. Then came the audiences.

"The people are very soulful," says Smith. "They listen -- you're on the ride together. It's an entertainer's paradise."

So what does Stanley Smith have in common with Petty Booka? Both have small but loyal followings in their native lands. Both have recordings well-received by their audiences. Yet, until each act left home and traveled thousands of miles across the sea, neither had experienced that narcotic sense of rock stardom.

Doug Allsopp is not a rock star. He's not a promoter. He's not even a Texan, but what the ex-Californian did was move to Japan in 1991 and start a small label outside Tokyo.

A fan of roots music, Allsopp and his Buffalo Records label specialize in blues, acoustic swing, alt.country, and New Orleans-style funk. To that end, he's brought several Austin acts to Japan, including Stanley Smith. Allsopp felt frustrated at the proliferation of Japanese pop (or J-pop) among Tokyo's few FM stations and "the fact that promoters never brought over anyone interesting."

"Getting bands over here is expensive," explains Allsopp. "And there isn't a live music culture, so it's incredibly hard to get people to shows unless it's the Stones. Unknown artists? Forget it. The most difficult aspect is letting people know. E-mail makes it easier, but people tend to stop going to live shows once they hit 30 or so. Job and family, lack of free time in general. Live music drops as a priority."

Japanese promoters are generally responsible for all expenses and risks involved, notes Allsopp. With venues rented by the night, financial losses occur if the show doesn't sell. Few venues operate on a percentage of ticket sales, but those that do, bolster the marketing effort because both venue and promoter suffer if the show flops.

In 1999, Allsopp arranged to bring over West Coast bluesman Kelly Joe Phelps, and the tour broke even. Buffalo expanded into imports and distribution, and Allsopp came to the realization that the best way to introduce an album in Japan was to release it there.

"Most stores only want Japanese releases," explains Allsopp, "since they have extra packaging that introduces the artists and talks about the music. Plus, Japanese music magazines don't review many imports."

Buffalo's first releases, the Asylum Street Spankers' Spanker Madness, the Gourds' Ghosts of Hallelujah, and Texas Trumpets, didn't exactly fly off the shelves, but they did well enough. In 2000, Ryan Adams' Heartbreaker and Chuck Prophet's The Hurting Business followed. Allsopp added more artists to Buffalo's stable, then turned his attention to the jazz-swing sounds of Austin's Hot Club of Cowtown and released two Japan-only compilations, Western Jazz and Western Swing. In May 2002, Hot Club of Cowtown packed their duds and flew to Japan for a tour.

Vocalist and fiddler for Hot Club of Cowtown, Elana Fremerman gets the same tone of unabashed admiration in her voice as Doster and Smith when she talks about the tour, during which the band's CD was the top-selling country album in Japan.

"We played five shows there, and the audiences were much livelier than anticipated, clapping in the middle of songs, hooting and hollering," marvels Fremerman. "And it was unbelievable how organized everything was.

"Texas has a certain mystique in Japan, and Texas acts seem to do very well there. People dressed up in full Western regalia for our shows. Their idea of roots music isn't predetermined and asphyxiated by major corporations, and that makes them open to peripheral acts like us. It's good for them, because they like the music. It's good for us, because it expands our fan base in a viable way."

Working with the right promoter was paramount to making Hot Club's tour successful, and Allsopp found that promoter in Hiroshi Asada, who coordinates Japan Night for SXSW. Asada is president of the Japanese management company Seven Gods Productions, the indie label Seven Gods Records, and its promotion division, Tom's Cabin.

Asada got his start in the U.S. as producer of the Japan showcases during the New Music Seminar's last years, but his break came with quirky Matador act Pizzicato Five in the mid-Nineties. Now, his clients include Petty Booka, for whom he has high hopes.

Asada sees the Texas mystique differently from Elana Fremerman. "Most people don't know about Texas music, even Willie Nelson," he wrote in an e-mail. But that's something that may change very soon; Asada's next foray into Texas comes in June, when he promotes the Asylum Street Spankers' tour of Japan.

"All the band does is get on the plane," laughs Asylum Street Spankers' manager John Riedie, explaining the ease of sending eight Spankers to the land of the rising sun. "Buffalo and Hiroshi handle it all; I didn't book a single show. And we're selling nearly as many records in Japan as the U.S."

In numbers, the sales aren't a lot. The band's latest, My Favorite Record, has sold about 2,400 copies in Japan as compared to about 3,000 in the states. (Comparatively, Spanker Madness sold some 12,000 copies worldwide.) Still, doubling sales is a feat for any band. And like Hot Club of Cowtown's Western Jazz and Western Swing, a Japan-only Spankers release called Sideshow is in the works.

"To us, this is free money," explains Riedie. "The record is made here, we just send a master and computer disk to Doug and a few months later we get checks."

"They really like wacky things, the Spike Jones aspect of the band. The songs that do well there are the gimmicky songs. 'Beer' was used in a Japanese commercial."

It's no surprise that Riedie is so positive about the Spankers' impending reception.

"The Spankers' oboe player played with Petty Booka," he points out. "We're all in the same musical universe."

Stephen Doster's tour with Stanley Smith ended on a surreal note. He remembers riding to the airport, reluctant to leave the country that had treated him so generously.

"On our way to the airport, our driver put in a CD. It was Tom Waits, and the song was 'Big in Japan.'"