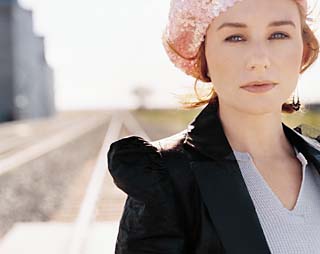 What was the most moving moment you had on the tour that inspired Scarlet's Walk? Tori Amos: A Native American woman came to see me. Somehow she knew I was writing a work about America's moral compass. She said, "I have a message for the woman who sings."

TCB: What was the message?

TA: She basically laid the ground rules and said, "This is a story that needs to be told, and if you're going to tell it correctly, the ancestors are there to assist you." It was very much a warning, in a way, that America's soul has been pimped out and manipulated by our leaders and everybody else. It's about a woman trying to find out who America is, and she reminded me that the Native Americans are the keepers and protectors of her soul, and they take it very seriously. That's their real mother.

TCB: You have an especially close relationship with your fans ...

TCB: Your love of Led Zeppelin is well known. What's your favorite song?

TA: For a while I really liked "No Quarter." I'll stand by that.
More TCB columns