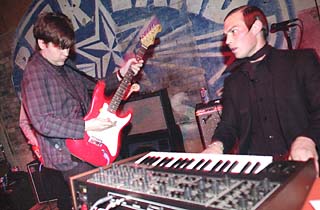 It was an innocuous Wednesday night performance at Emo's by Chapel Hill's Crooked Fingers, the frank, indie-Americana outfit led by gravelly voiced ex-Archers of Loaf frontman Eric Bachmann. There, amid the bowed bass and booze-soaked drinking songs, slithered out a peppy progression of notes that hearkened back 20 years: It was New Order's 1983 nugget "Age of Consent," replete with faux-synth guitar effects. It was brilliant.

From Donnie Darko to music's biggest new buzzword, "electroclash," there's no escaping the Eighties, which is back with a vengeance, lurking around every corner. In Austin, it started out on Sunday nights late last decade, Eighties night at the Atomic Cafe (now Elysium), where local scenesters found themselves swept away by the pulsating synth rhythms of groups like OMD, the Human League, and New Order. Turns out Austin wasn't the only town these retro nights were taking hold of.

Now, the phenomenon has reached another level. Electro-pop bands from around the country, like Fischerspooner, Soviet, Ladytron, and the Faint -- who play Sunday night at La Zona Rosa -- comprise a "nu wave" of Euro-influenced, synthesizer-flavored music. And they're invading both unlikely venues and unlikely labels such as Sub Pop, which houses the Postal Service, a synth-pop side project of Death Cab for Cutie's Ben Gibbard.

"There's a certain faddishness about it," says Sean O'Neal of local synth-flavored art-rockers This Microwave World. "All of us indie rock kids who suffered through grunge and then the rise of the slacker are suddenly discovering how much fun it is to dance."

For the Faint, who formed in Omaha, Neb., in the mid-Nineties as a fairly generic indie-pop band, changing their sound to a more retro synth-based style was a reaction to the emo and indie rock that surrounded them. It was a bit like flaunting Doc Martens and Pet Shop Boys albums at your local high school in the late Eighties -- an attempt to throw people off their guard. 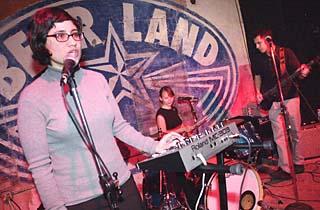 "We liked the idea that people would hate it when we started using a lot of keyboards instead of guitars," says Faint vocalist Todd Baechle. "At the same time, we started doing our own lights and fog and things that were real over the top."

After spending much of last year on the road opening for No Doubt, the Faint now find themselves in the position of approximating that dark, Eighties Goth-club feel at larger venues like La Zona Rosa.

"People don't give them enough credit for what they do based on their sex appeal," says Microwave's O'Neal of the Faint, who he's opened for twice while with the now-defunct A Roman Scandal. "It's easy to slag a pretty band who dresses all in black and makes your girlfriend scream. There's nothing wrong with sounding like Depeche Mode if you do it well."

Meanwhile, over in Williamsburg, N.Y., a neighborhood in Brooklyn, resident DJ and promoter Larry Tee continues to inject new talent into a club craze he all but manufactured. In late 2001, Tee organized the first Electroclash Festival, featuring sexually charged, theatrical, neo-Kraftwerkian acts like Fischerspooner, Peaches, and Chicks on Speed. Tee, whose previous claim to fame was producing RuPaul's novelty hit "Supermodel," also put together the first Electroclash compilation, which included the straight-out-of-1986 revivalist synth-pop sounds of Soviet.

The hallmarks of Electroclash™, a term Tee actually trademarked, are a preponderance of vocoders, "Blue Monday"-like basslines and beats, and an element of outlandishness like that of the "Emerge"ing Fischerspooner, whose gender-bending, occasionally lip-synched performances are closer to a fashion show than a rock concert.

Also lumped into electroclash is Detroit's Adult., whose shouty, art-punk take on the genre belies the aggressive electro-pulse beneath. Adult.'s new Anxiety Always brims with the detached, arty abstraction of the seminal 1978 single "Warm Leatherette" by the Normal (Mute Records founder Daniel Miller). Both Adult. and their forebears have one foot in the dark, subversive subset of music inspired by Joy Division and Wire that's currently undergoing a simultaneous revival thanks to bands such as Interpol and Liars (see accompanying article, "The Pleasure Principle"). 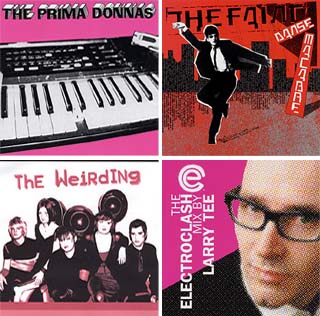 In Austin, a handful of synth-charged rock bands have cropped up, most of whom, like This Microwave World, lean on danceable rhythms and the wry, hypnotic cleverness of Eighties-era Brit bands. TMW's sister band Kino Eye is a local fourpiece featuring tandem female vocals behind a bevy of groovy live-drum spindles. They're epitomized by the superb anthem "Donnie Darko," which, like the film itself, is both dated and timeless -- a tense, period-piece wormhole.

Then there's the Weirding, who churn out a drum-machine-driven synth-groove retaining vestiges of frontman Dean Hsieh's garage-rocking locals, the Wontons. The cover of their debut EP is a hilarious mock-up of the Human League that speaks volumes about the current climate, both having fun with and drawing inspiration from early-Eighties sources.

"It's hip to be idiosyncratic again," says O'Neal, whose A Roman Scandal included Jason Reece from Trail of Dead. "This 'revival' is more like kids rediscovering that it's OK to not be able to describe your sound."

Any discussion of Austin synth-pop revivalism would be remiss to not include the Prima Donnas, whose faux-British accents and attitudes spat in the face of the musical trends of the mid-Nineties. No doubt their influence on the hipsters led to the Sunday night scene at Atomic Cafe, which still attracts the masses in its incarnation as Elysium.

For a while, the "nu wave" aesthetic lived on at Le Privilege, through the booking work of both O'Neal and James Minor, guitarist for Ova Looven, a synth-pop/DJ hybrid featuring the NYC-based ex-members of the New Order-inspired Antarctica. Privilege's mishmash of nu-wave bands, including roadshows like Glass Candy and A.R.E. Weapons, as well as retro-futurist DJs like Transexformers, drew an interesting amalgamation of clubgoers before the club was suddenly shut down a few weeks ago.

While he remains wary of backlash, going as far as dropping songs that sound "too electro" from This Microwave World's catalog, O'Neal vows to revive that mood with a residency at Beerland that will include DJs.

Even as bandwagoners and pop-culture fetishists work feverishly to re-create the synthetic thrills of a bygone era, O'Neal and his ilk continue to advance the dual lessons of individuality and accessibility gleaned from the Eighties. Because, in this nu age of consent, the best way to move forward is to look back first.