More Fun in the New World

It's the declaration girlfriends and employers across the nation dread: "We're getting the band back together." And yet, those words should be cause for celebration among fans of live local hip-hop, because this weekend marks the first time since last July that Austin's Hip Hop Humpday crew are sharing the Mercury stage. Cutmaster DJ Phyfteen says "everyone ever involved" has been invited back for Friday and Saturday's shows, although a few people (like DJ Massive) have been difficult to locate. Definitely appearing will be MCs Bavu Blakes, Tee Double, Tray God, and Element and musicians D-Madness, Bruce James, Brian Mendes, Rudy Eccles, and Andre van Buren. The m.o. will remain exactly the same -- entirely freestyle and improvised -- but the two sets and intervening DJ break each night will be extended. "We haven't rehearsed," Phyfteen swears. "The last time we were all together was the last show." Sadly, since the Humpday crew went their separate ways, the local underground hip-hop scene has fallen on lean times. While there remain plenty of places where people can get their groove on (Nasty's, Plush, Spiros), right now, "There's not a lot of time, effort, or energy put into local artists," says Phyfteen. "If you're a local cat, you've really gotta know what you're doing on the business side, because clubowners are only down to do something if they know their profit margin's gonna be good." Phyfteen believes that promoters still harbor longstanding and largely unfounded suspicions that booking live hip-hop means inviting a bunch of thugs into the club to go buck-wild. "Just treat us like everybody else," he asks. "The people who come see us, their money's green like everybody else's." Even though this weekend's Humpday reunion was originally planned to bid the Mercury farewell, Phyfteen and a lot of other locals have been relieved to hear that the club appears to be staying open. Mercury Entertainment President Mark Collins says he's in the final stages of negotiating with the building's owners to take over the lease, and is awaiting a walk-through by city inspectors to determine the room's capacity; he's hoping for 500, but figures 425 is more realistic. Originally scheduled to close at the end of this month, the Mercury is now booked through May, and booker Philip Croley says he has his eye on a My Morning Jacket/Burning Brides makeup date in June, as well as a September visit from the Drive-By Truckers. That's aloha as in "hello," not "goodbye." Alive and kicking and continuing to make unsuspecting clubgoers think they've just glimpsed the ghost of Hank Williams is the pride of Tokio, Texas, James Hand. The formerly reclusive Hand reckons he's undergoing "kind of a resurgence," with steady gigs at the Continental Club, Saxon Pub, and Poodie's Hilltop, plus one Wednesday a month at Jovita's. Though he's relocated from Tokio, near the truck-stop oasis of West (north of Waco), to Cedar Park, Hand still likens coming into town so often to "going to get a dozen eggs, but I have to make 12 trips." Hand, whose 2000 Coldspring release Evil Things contains as much heartbreak and pathos as 10 Cure albums, says certain realities preclude his making another one. "I'd have to pay for it," he said after his Continental set last Sunday. "I'd been saving up, but I bought a six-pack on the way down here." Earlier, as he alternated standards like "In the Corner, at the Table, by the Jukebox" and "Fraulein" with originals such as "When You Stopped Loving Me, So Did I," Hand gave ample proof his songwriting well isn't even close to running dry. (Every other song, it seemed, was introduced with: "Here's one I wrote the other day. ...") In fact, he has precious little patience for anyone who interrupts their daily routine to await that shoulderly tap from the muse: "That's just a bullshit, counterfeit way for someone to feel like they're important." Hand appears 9:30pm Sundays at the Continental Club before Heybale and in the 5-7pm slot Thursdays at the Saxon Pub.

Hope you filed your tax return early, because this weekend offers a wealth of opportunities to liquidate that refund check by stocking up on music. A local record collector has racked up several thousand dollars of debt, so to satisfy his landlord's lien, a public auction is being held 10am Saturday at East Central Storage, 3222 E. Fifth. The collector, formerly a major consigner to Antone's Records, is reputed to have a vinyl collection numbering in the thousands, along with various other music memorabilia. Cash, money order, or cashier's check only... Since Wherehouse Music recently filed for bankruptcy, the national chain's Austin stores at 4901 Burnet Rd. and 9607 Research will soon close their doors and have slashed prices across the board. The location at 4211 S. Lamar will remain open... Finally, the Austin Record Convention next weekend, April 26-27, should take any leftover greenbacks off your hands. Hours are 10am-6pm Saturday and Sunday at the Crockett Events Center, 6301 Hwy. 290 E. The $4 admission is good for both days. 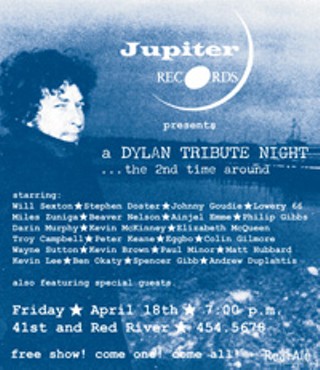 Jupiter Records owner Jason Enright recently put in a stint managing reborn local rockers Fastball's West Coast tour. After the trio's San Francisco show (opened by a vacationing Paul Minor), the Austin contingent decamped to a nearby karaoke bar, where 'Baller Miles Zuniga performed the group's "Fire Escape." "Nobody knew who he was," reports Enright, "but the DJ said he was really good!" Enright has since gone back to his day job of being Austin's No. 2 Bob Dylan fan (brother Ryan Enright gets top honors) and planning Friday's Dylan Tribute Night at their Hancock Center HQ to commemorate Sir Bob's two-night stint at the Backyard this weekend. The bill of fare includes:

Kevin McKinney, "Most Likely You Go Your Way (And I'll Go Mine)"

Matt Hubbard, "It Ain't Me Babe" 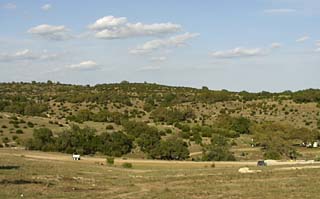 Two Rivers Run Through It

Surveying the 800-acre Two River Canyon Amphitheater in Blanco and Burnet counties, it's not hard to imagine a band of Comanches riding over one of the cedar-flecked ridges or a herd of wild horses slaking their thirst at the idyllic spring-fed pond. It would be easier if not for the earth-moving equipment, but the vast expanse of land near Spicewood is Direct Events doyen Tim O'Connor's latest undertaking. Much as he did with the Backyard, O'Connor aims to augment the site's natural beauty by planting trees, building stairways out of the plentiful indigenous rock, and blending soft lighting into the landscaping to give the venue a natural glow. "The less concrete we have to pour, the better," he notes. Located 30 minutes from Austin on Highway 71, the property also includes copious parking and camping facilities. O'Connor hopes to eventually bring between four and 10 shows a year to Two River Canyon, with the first visit from Willie Nelson. To commemorate the 30th anniversary of the Red Headed Stranger's Fourth of July picnic, O'Connor has booked a two-day event with Nelson, Pat Green, Toby Keith, and a three-hour set from the Dead July 4, and Nelson, Neil Young & Crazy Horse, Billy Bob Thornton, and Los Lonely Boys July 5. Tickets go on sale 10am Saturday through Star Tickets, at $40 per day (until May 9) or $80 for a two-day pass. Call 1-866-646-CAMP to make camping arrangements. 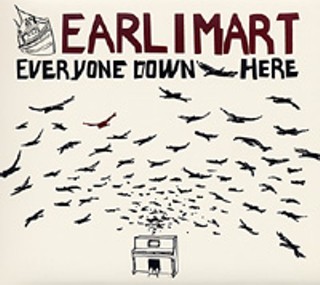 : The Southern California trio, who share the hometown of Modesto with beard-rockers Grandaddy, are touring behind their restrained, introspective new LP, Everyone Down Here (Palm), but they can also rip it up like the Pixies live. (Emo's, tonight, Thursday, with Ozma and Slow Reader)

SIR MIX-A-LOT: Seattle's high priest of gluteus maximus makes his way into Spiro's new amphitheatre, where hopefully that full-length fur coat won't cause Sir Swass to pass out. While we would never, ever argue with a round thing in our face, true Mix-heads are all about "Posse on Broadway." Posse up! (Spiro's Amphitheater, Thursday 24)