Back in Black (Epic)

When Olivia Newton-John was Australia's biggest musical export, AC/DC rolled into the U.S. on Angus and Malcolm Young's thunderous hit-and-run guitar attack, bon vivant badass Bon Scott's leering vocals, and raunchy odes such as "She's Got Balls," predecessor to later classic "Big Balls." Such degenerate blasts from the group's pair of 1976 LPs, debut High Voltage and later reissue Dirty Deeds Done Dirt Cheap, sounded straight from the gutter, too, thanks to no-frills production from Angus and Malcolm's older brother George Young and his ex-Easybeats bandmate Harry Vanda. The band's raw power and knack for monster riffs was evident in the blitzed-bushmen chants of songs like Voltage's "T.N.T." When producer Mutt Lange simultaneously streamlined and pumped up their attack on 1979's Highway to Hell, the Aussie invasion was on for real. Angus Young mined one sledgehammer riff after another, and the band's blue-collar roots and adolescent hell-raiser image staked out a perfect hard rock middle ground on catalog favorites like "Girls Got Rhythm" and "Shot Down in Flames." The band only grew more defiant and resolute after Bon Scott drank himself to death, replacing his cackling bellow with the banshee wail of Brian Johnson and coming up with the epic achievement of Back in Black. Paying homage to Scott with church bells kicking off "Hells Bells," barfly anthem "Have a Drink on Me," and the mission statement of "Rock & Roll Ain't Noise Pollution," Back in Black guarantees that "rock & roll ain't never gonna die." Malcolm Young and the rhythm section were the band's secret weapon, pounding 4/4 time as sturdy as a two-by-four. They're also the backbone of Live, a surprisingly compelling 2-CD set from 1992 where the band tears through pre- and post-Bon Scott catalogs between roaring stadium-audience chants of "Angus! Angus! Angus!" The first volley in a catalog overhaul, complete with remastered sound and restored artwork, but no bonus tracks, these titles are indeed "Thunderstruck." 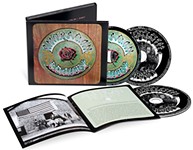