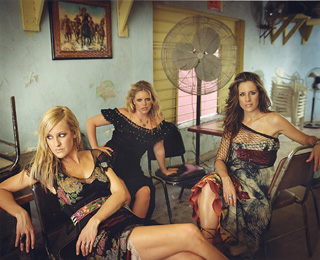 South by Southwest headliners -- well, sort of: The Dixie Chicks

Ironically, the biggest Austin-related bit of music news last week had nothing to do with SXSW. Local transplants the Dixie Chicks became either latter-day Hanoi Janes or the coolest band on the planet (ending Radiohead's six-year run) March 10, when lead singer Natalie Maines told a London crowd, "Just so you know, we're ashamed the president of the United States is from Texas." Though Maines later apologized, saying, "I am a proud American," the comment caused many country fans' tempers, and subsequently radio-station switchboards from sea to shining sea, to light up like, well, the Fourth of July. As late as Tuesday, the Cmt.com message boards were drawing topics like "Dixie Chicks Honorary French Citizens" and "Quick Poll -- Number of Anti-Chicks" (1,111 replies). The Billboard charts due out today should reflect a sharp drop in sales and airplay, since the group's songs were pulled from many stations, although not all. KGSR's Jody Denberg said his station would keep playing the Chicks, because "we don't make our music choices based on an individual's politics," while Houston Pacifica outlet KPFT vowed to spin the trio "now more than ever." John Ashcroft permitting, the Chicks' Top of the World tour stops at the Frank Erwin Center May 21 (sorry, it sold out in two hours). At least one "Free Natalie Maines" shirt was spotted at SXSW.

Austin, which has already witnessed enough music-related deaths this year to last until next January, lost two Raul's-era survivors in recent days. Onetime Talmadge d'Amour keyboard player Gary "Wheelchair" Guthrie, who succumbed to emphysema last week at 50, was remembered by Southwest Texas State roommate Jesse Sublett of the Skunks as a "chick magnet," who was "smarter than the next 10 guys in the room." Also passing away was former Standing Waves drummer David Dage, 43, who played in local outfits Mr. Jones, Great Guns, and Last Straw. A Short History of Standing Waves Part 1 is now available at Waterloo Records, and the band's reunion show April 19 at the Saxon Pub will be dedicated to Dage's memory. Saddle up, pardners, because it's time to git on down to the Travis County Expo Center for the 2003 Star of Texas Fair & Rodeo. This year's musical lineup is long on hot-country favorites, plus a few familiar faces, and even the Godfather of Soul. Think I wanna kiss myself!

March 28: Asleep at the Wheel