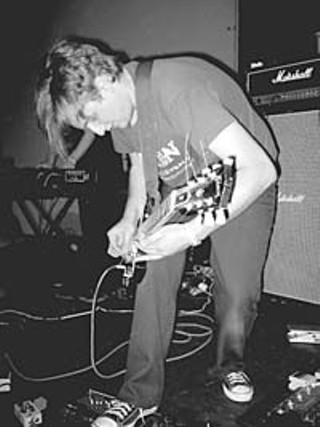 Blue Theater, Friday, March 14 While most folks bombarded either the Bloodshot Records party at the Yard Dog or the huge clusterfuck at Emo's, over at the Blue Theater was a much more intimate, hangover-friendly day party. A seated affair no less. With hot dogs on the grill and the warm afternoon air wafting in from outside, My Education took the stage around 2pm. The Austin instrumental septet sculpted an exquisite, very loud wall of sound, buoyed by the string work of Travis Weller and James Alexander. No less than 20 effects pedals were strewn about the performance area, and it's safe to say they got maximum usage, with the band members spasmodically thrashing about in the eye of the aural hurricane. Local fourpiece Halley followed, showing off the more raucous, space rocky side of their melodic repertoire. Frontman Trace Faulkner belted out the frazzle-fried "Heart Attack on a One-Way Street" and "Record Player Pt. 1" before launching into a couple of new songs that found him thrashing about furiously. Drummer Scott Oliphant took the mic for a pair of tunes while Faulkner murdered the drums. Finally, they capped it off dramatically with a Faulkner-fronted piece that alternated mellow interludes with pulverizing shrieks. Next up was Maserati, Kindercore Records' instrumental quartet out of Athens, Ga. The drum kit was set up front and center, and it soon became clear why, with drummer Phil Horan providing the propulsion behind Maserati's complex weave of interlocking reverberated lines. Most of the songs were in the seven- or eight-minute range, with an ever-so-gradual buildup that peaked in intensity toward the end. The crowd was completely transfixed by these master craftsmen. The highlight was the appearance of a guest drummer who pounded the large floor tom in unison with Horan, providing a midafternoon wallop that could have only been matched by Seattle's Kinski, who were slated to close out this deep-listening bill after a set by Austin's Winslow.