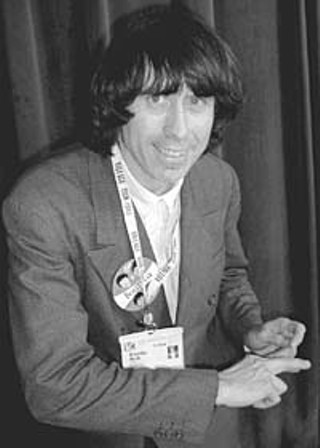 Where: Spin Party at Stubb's

Insider: This is your eighth year at SXSW. When did people start paying attention to you?

BB: It started the first year. There are a lot of bands I've seen at home in St. Louis and at festivals that would mention me onstage or have me up to dance with them. People knew from that, so when they started seeing me at SXSW and wondered who I was, someone near them would say, "That's Beatle Bob. He dances."

Insider: What's the secret to the dance?

BB: It's a hodgepodge of Sixties dances I'd seen in Shindig! and Hullabaloo. My friends Dash Rip Rock wrote a song about it that will be on the next CD. It's called "Do the Beatle Bob." It explains everything, but my signature move is to get your hands to look like you're throwing dice and then kick your leg back like a bowling move. When Dash brought me onstage last year to debut the song, the whole crowd implemented it. It looked like an aerobic instructional video -- a sea of Beatle Bobs.

Insider: It's been said that if you see Beatle Bob at a show, it's the right show. What's the criteria?

BB: Sometimes I do too much research. It looks like a big racing form; I'm circling things keeping in mind what's before and after, which clubs are close together, and which clubs are small enough that I'd need to be there an hour early. You can't be everywhere at once; you're always missing something good at this festival. You have to forget about what you're missing and focus on what you're seeing at that time.

Insider: You're at parties all day and showcases all night. How do you do it?

BB: It's leading an un-rock & roll lifestyle. I don't drink alcohol, don't smoke, and I'm a vegetarian. It's tough to find veggie food at a Texas party. But I'm not complaining. I can get by on four hours sleep and get going after a big healthy breakfast. I always tell people that no matter how tired you are, drag yourself into the venue. The bands will do the rest for you -- they'll pick you up.