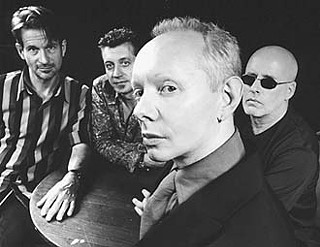 If you're looking for a bloke who's delved into almost every type of popular music, someone who's accomplished the feat with confidence, skill, and a measured amount of style and success, Joe Jackson is the man.

Originally from Portsmouth, England, the classically trained pianist entered the world of pop music in 1979 with Look Sharp!. Bristling with attitude while wondering "Is She Really Going Out With Him?," Jackson and his band -- Gary Sanford (guitar), Graham Maby (bass), and Dave Houghton (drums) -- spent the next two years constantly touring and released two more albums, I'm the Man and Beat Crazy.

Both were filled with straightedged rock, with the occasional ballad and snatches of ska, and included more memorable songs like "It's Different for Girls" and "One to One." Then, at the end of 1980, Jackson put the band to rest to experiment with other musical forms. Since then, he's taken forays into swing, urban pop, classical, and film music. He's even wrote the well-received A Cure for Gravity in 1999, "a book about music thinly disguised as a memoir," according to Jackson.

But now, those who know Jackson as a man who always looks ahead are in for a shock. 2003 marks the 25th anniversary of the recording of Look Sharp!, so he's reassembled his original band, recorded the just-released Volume 4 with them, and is on tour.

"I never thought this would happen," admits Jackson. "But I'd written six songs and realized they would work well with that band. I met with them, and all of them were excited about working together again. We tried it out, and it felt good. We had an adventure together back then, and we have a bond because of that.

"I'm not a nostalgic person," states Jackson, "and there are nostalgic elements to this project, which surprises me. But I'm at a point where I'm comfortable with where I am and with what I've done, and this just feels right."