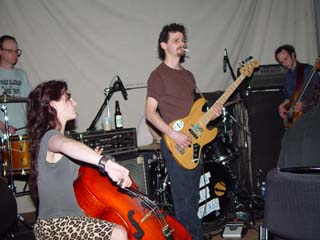 Texas Union Ballroom, Thursday, March 13 How long can you keep up the apocalypse? The last time Godspeed You! Black Emperor graced the River City was 1999, or two years before 9/11, in apocalypse-speak. This nine-member French Canadian coalition has made their name on haunting themes, samples of derelicts preaching about the end of the world, and some of the most rousing string-driven crackles this post-rock world has ever known. And post-rock it was, these Montreal anarchists drawing in all sorts of UT folk, and sending a message that one doesn't necessarily need a wristband, let alone a badge, to see one of the most highly anticipated musical spectacles of Austin's year -- particularly since this was a non-SXSW event. Pre-9/11, Godspeed was all about the samples and highly dramatic minor-chord themes. Ever since, they've made a conscious effort to stray away whenever possible, if last year's sedate Yanqui U.X.O. was any indication. It was obvious from the get-go, as the self-conscious first hour of Godspeed's set left many of the tranced-on-the-verge-of-collapse concertgoers yearning for more rock, and indeed, even more talk, as the creepy vocal samples were nixed almost entirely. Then, at some undetermined point, Godspeed decided to cut loose. The three screens that played host to a number of grainy everyday street scenes still lay mostly fallow, but the rock, it did fall down from the heavens. About 90 minutes into this nearly-pitch-black 10pm show, the triumphant bells erupted, leading to an ever-escalating riff that reeked of unholy doom. After the razzling three-chord scree of "Moya," things seemed to be winding down, as a layer of soothing strings came a-raining down. Come to find out, though, this was only the beginning. Godspeed played out the entirety of the 20-minute piece, with the long-awaited debut of sampled street preacher Blaize Bailey Finnegan III breathing new life into this diverse set of young defiants, as the raging behemoth continued to drone on late into this Thursday night.