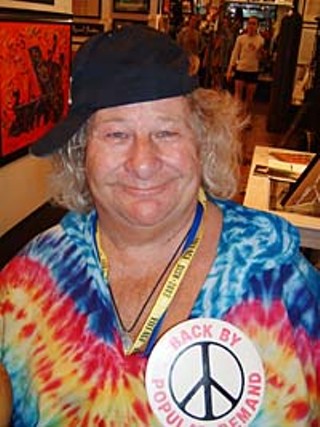 Where: Wild About Music, 721 Congress

Insider: As an activist are you effective because you're having fun?

Gravy: I hope so. I'm an intuitive clown, and it's the job of the intuitive clown to turn shit into fun. And if war ain't shit, I don't know what is. It's painful shit. We've been Bushwhacked! And protest is good. I used to open for Thelonious Monk, who said, "Everybody is a genius just being themselves."

Everybody needs to stop trying to be someone else and figure out who they are and what they can do. The Dali Lama says, "All you have to do is your best to make the world a better place." If we all did that, the world would be a better place.

Insider: Have we overromanticized the Sixties?

Gravy: Yeah, because these are the good ol' days. But don't underlook the Sixties; we started eating more vegetables, respecting women, and we shut down Vietnam. We did a lot of good stuff. But it shouldn't shut you down from the moment. Eternity is now, OK? I'm not a decade-ist.

Insider: Your art is here on exhibit with Jerry Garcia's. He was your friend. What don't people know about Jerry Garcia?

Gravy: That he was a human being. He didn't glow and float. It was hard for Jerry to live with the deification. When he was making music, he was happiest. He was smart and witty. I miss him. Not a day goes by that I don't miss Jerry.

Insider: What do people misunderstand about you?

Gravy: Bob Weir calls me a saint, but I'm Saint Misbehavin'. They're making a documentary about my life, and that's the current shooting title. I can roll with that, but otherwise the s-word makes me really paranoid. I'm just an asshole like everybody else. I'm 66, and I'm still doing what I was doing when I started this. That's a pretty great place to be.

"Blue Gravy ... With a Side of Jerry" runs through March at Wild About Music.