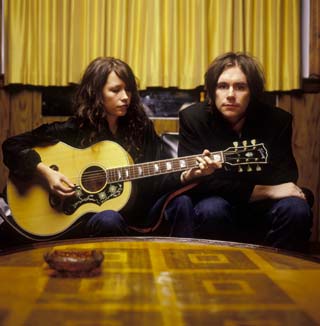 This is the kind of story that we think doesn't happen anymore, one that involves romance and folk music. Johnny Irion and Sarah Lee Guthrie met in L.A. through a mutual friendship with Chris Robinson of the Black Crowes. Married in 1999, the couple now splits their time between Massachusetts and South Carolina, and late last year, they had a daughter they now tour with.

Some may recognize Irion's name; he was in Queen Sarah Saturday and Dillon Fence, two Nineties alt-rock bands. Guthrie is the youngest daughter of Arlo, granddaughter of Woody. That's where the folk music part comes in. She made her live debut at the age of 14 at Carnegie Hall when she appeared with her father and Pete Seeger.

"I was into punk rock and heavy metal for a while," relates Guthrie, "but the rebellious side of me was deciding to go to college. I was the youngest of four, and nobody had been to college."

"My mom stopped me just as I was going to do that. ... I always knew that I was in a family that meant a lot to people and that's grown so much as the years have gone by. It's still blossoming."

Guthrie claims to have discovered the music of her grandfather in a rather ironic, if not totally surprising, way.

"I was inspired by Dylan at a young age, believe it or not. With all of Woody's books and inspiration down in my basement, I went through Dylan to find out who he was. He inspired me to write, but Johnny was the one who put the guitar in my hands."

They've each released a CD of solo material -- Irion's is called Unity Lodge, while Guthrie's is self-titled -- that have garnered them a growing fan base. For now, they perform as a duo.

"We did a gig one night, and it went really well," says Irion. "We spent so much time apart that we figured it was a good excuse to spend more time with each other."