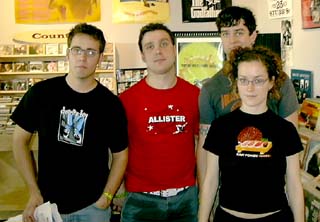 Someone would have to knock on a lot of doors before finding a nicer band than the 2003 Austin Music Award winner for Best Alternative/Punk Band, Cruiserweight, who joined "TCB" for ice cream at the Marble Slab after playing an in-store Wednesday afternoon at Jupiter Records. Still surfing the wave of popularity created by their luminous 2001 EP, This Will Undoubtedly Come Out Wrong, the 4-year-old local quartet is somewhat casual about their newfound status.

"Most of our friends' bands don't get a lot of recognition," says guitarist Urny Maxwell, "so it's cool when any one of our friends does."

Even in a genre that caters to young listeners, Cruiserweight is notable in that some of their most dedicated fans have yet to begin kindergarten. That's because singer Stella Maxwell teaches preschool.

"We played at my preschool last year," she laughs, "so there were all these 4- and 5-year-olds running around wearing Cruiserweight shirts."

Presently, the band -- which also includes drummer Yogi Maxwell and bassist Dave Hawkins -- is without a label, but that isn't stopping them from preparing to record their first full-length album at the Maxwell's cousin's Kansas City studio in May.

"There's been [label] interest for a long time," Urny explains. "It's just a matter of making it all come together."

Cruiserweight's show Saturday night at the Flamingo Cantina will be its last local date until late April, because even in a band with three siblings and whose members all share living quarters, there are the inevitable limits.

"We make it a point not to hang out with each other too much," admits Urny.

This year's honorary Icarus Line "Fuck Shit Up" award goes to NYC garage-rockers the Mooney Suzuki, who got a little carried away at their Tower Records in-store Thursday afternoon. Both the group's singer and guitarist's enthusiastic, ceiling-grabbing antics resulted in a shelf of CDs being knocked over and the wanton destruction of a giant Datsuns poster board... The newest anatomically named band in Austin is Mangina, featuring former members of the Motards and various wives and girlfriends. The group debuted Thursday afternoon at Beerland with an appropriately sloppy set of covers, including songs by the Meatmen, Rockbusters, and Empire of Shit... The Derailers' Brian Hofeldt says the Austin twang institution, celebrating their 10th anniversary this year, plans to cut back their touring schedule from 300 dates a year to 250. The singer/guitarist says the band members' families are "extremely" happy about this development... Three bands will be $15,000 richer after the winners of the Austin Music Foundation's inaugural Incubator grant are announced Friday afternoon at the Red Eyed Fly. Finalists are Kissinger, Milton Mapes, and Wide Awake (rock/pop); Overlord, Liquid Stereo Project, and Abyzz (urban/hip-hop); and Jeff Hughes' Chaparral, Kevin McKinney, and Tucker Livingston (country/singer-songwriter)... Finally, "TCB" would like to apologize to newly appointed Texas Music magazine editor Richard Skanse. At Wednesday night's Austin Music Awards, we mistook Skanse for former Daily Texan colleague Chris Riemenschneider and asked him rather brusquely, "What are you doing here?" In our defense, the two could pass for twins. Fraternal twins maybe, but twins nonetheless... 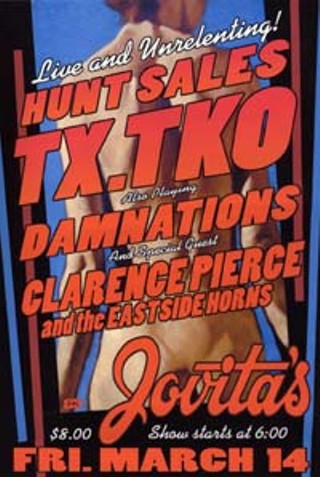 "We haven't broken up," insists Damnations bassist/pianist/singer Amy Boone. "People keep coming up to us and asking if we broke up."

Such rumors, which Boone thinks began when she played a solo show with the Gourds New Year's Eve at the Mercury, couldn't be further from the truth.

"We're family," she says. "We're going to be playing together when we're 80 years old and sitting on the porch with no teeth."

The band's profile has been lowered significantly in recent months, she says, because they've all had to concentrate on their day jobs since Houston-based distributor Southwest Wholesale went under last month. The band has little chance of recouping any of the money owed them by Southwest, because even if they were to throw in for an attorney, the legal fees involved would cancel out any potential paydays.

When not punching the clock, the Damnations plan to record new material at Spoon drummer Jim Eno's home studio next month, and are working on securing a Continental Club residency with the Weary Boys. The band, now with former Ministry drummer Rey Washam behind the kit, play Jovita's Friday night with Hunt Sales' TX TKO and Clarence Pierce & the Eastside Band. Boone says they're sitting out SXSW this year because in the past, "so many up-and-comers can't get in because people like us are playing."

HOW ARE YOU ENJOYING SXSW SO FAR?

"I want all the out-of-towners to leave, except my friends. They can stay."

ANY TROUBLE WITH PARKING OR OTHER INCONVENIENCES?

"I want all the out-of-towners to leave, except my friends. They can stay."

WHO ARE YOU EXCITED TO SEE?

"I was really excited to see Tony Joe White last night. I only stayed for two songs, but it was really good."

WHAT DO YOU PLAN TO DO WHEN IT'S OVER?