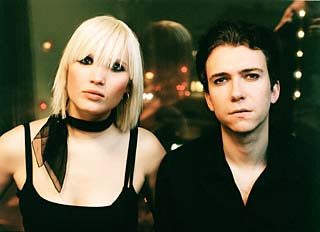 What's so "glorious" about the key of B-flat minor, anyway?

"It was a guitar thing," vagues a coy Sharin Foo, the "ettes" half of Denmark's Raveonettes. One can almost see her buffing her nails this early Sunday evening in her Copenhagen abode. "It just felt good on a guitar."

Well, that explains everything, then. Not quite. It explains a tagline on the Fifties noir one-sheet doubling as the cover of the Raveonettes debut EP, Whip It On. Eight furtive songs, 22 exhilarating minutes, three chords, and the brute -- Sune Rose Wagner.

"Sune [soo-nee] is very inspired by the whole Beat generation and literature and that way of writing: 'Don't go back and revise.' So during the whole production we chose not to have high-hats and ride cymbals, which then makes you think more creative, and then you have to do things in a nontraditional way. It makes it more fun, and more of a challenge."

Wagner and Foo [foo], who met in Denmark's malnourished alternative scene two years ago ("our voices sounded so great together"), recently challenged themselves to a full-length for Sony. It is, of course, a departure from Whip It On.

"When you in play in a minor key, that's the more sad sounding," explains Foo. "It can be a little introverted. And very mellow. But when you play in major key, it opens up a little more. It makes it easier to sing some melodic tunes."

"Right now, this is the way we do it, and it feels natural. I don't know what's gonna be the next thing. Actually, we have four chords on some of the songs on the new album. We're getting quite sophisticated now [laughs]. As long as it's fun, and we find it something that makes it interesting for ourselves, then we'll just keep on doing it."