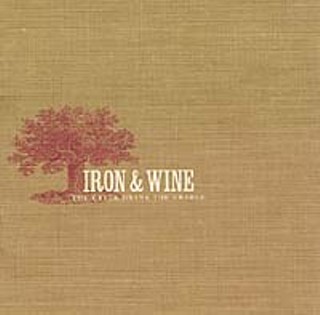 The Creek Drank the Cradle (Sub Pop) Music is generally a social event, but sometimes working by oneself can be a highly clarifying endeavor, not fraught with difficulties of consensus-by-committee decision making. This is the case with Iron & Wine, the musical nom de plume of Sam Beam, a film professor from Miami, Fla. That description may be inauspicious, but Iron & Wine's music is anything but, beautifully revealed in The Creek Drank the Cradle. Sub Pop isn't known for such decidedly acoustic albums, driven by guitar, hushed vocals, banjo, behind-the-beat tempos, and slide guitar, but this debut definitely puts them on the map. These 11 tracks, culled from two previous LPs, range from "Weary Memory," a honey-paced tune with exceptional harmony vocals and supported by understated slide guitar, to banjo lament "Promising Light" and lost O Brother soundtrack cut "The Rooster Moans." These songs aren't happy, but with their heartfelt delivery and simplistic beauty, they touch places in the soul that stir your consciousness, like a mournfully sweet bird song breaking your deep slumber. No dazzling chops or blinding technique here, just enough notes to convey emotion, as in the bittersweet masterpiece "Upward Over the Mountain" and Southern noir ballad "An Angry Blade." The Creek Drank the Cradle has all the makings of a late-night, candlelit, four-track recording session. An astonishing debut. (Red Eyed Fly, Saturday, March 15, 11pm)