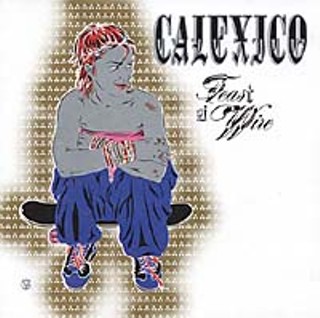 Feast of Wire (Quarterstick) Over the course of three full-lengths and myriad EPs, singles, and collaborations, Tucson, Ariz.'s Joey Burns and John Convertino have carved out a unique brand of desert music -- an untouchable blend of mariachi, jazz, pop, and spaghetti Western. Their fourth long player, Feast of Wire, finds Calexico fusing the sunny fiesta-pop elements of Spoke and Hot Rail with the border-town-at-3am intrigue of their 1998 magnum opus, The Black Light. Opener "Sunken Waltz" is one of Burns' most immediate songs ever, his smooth, slightly smoky voice backed by accordion, minimal pedal steel, and Convertino's varied bag of percussive tricks. "Black Heart" is the band at their most symphonic, a full string section coalescing in a grand, dramatic Western dissonance behind Burns' vivid imagery. The cinematic "Woven Birds" finds tasty vibes filling in the empty spaces that lie between the ghostly tumbleweed spats of Morricone-style melodica. Feast of Wire is even more intricately arranged than The Black Light, though the sheer diversity of this album prevents it from approaching the grand gestalt of Black Light. "Attack el Robot! Attack!" is a fascinating experiment in rabbit-ears technology, crossing the primitive electro wires of the album title with shakers and mariachi trumpet. "Crumble" is Thrill Jockey-style nü-jazz, following in the footsteps of 2000's Descamino 12-inch and the Chicago Underground Duo. Then Burns whips out the Marty Robbins good "Across the Wire," and you could swear you were back at their sun-baked siesta set at the SXSW 2000 P2 backyard party. Gracias, señores! (Antone's, Saturday, March 14, 10pm)