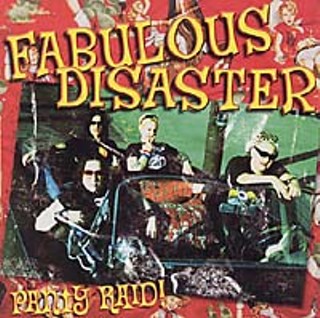 Panty Raid! (Pink & Black) They may look like L7's butchier cousins -- the bassist's name is Mr. Nancy, if that helps -- but San Francisco foursome Fabulous Disaster's Panty Raid! has a serious Josie & the Pussycats fetish. Nonstop, Marshall-stacked, cherry-sweet California punk most prominently practiced by beachgoing brats Blink-182 and Face to Face, Panty Raid! never met a major chord it didn't feel a profound and abiding affection for. This makes sense: They were discovered by NOFX's Fat Mike, who produced their first album, 2001's Put Out or Get Out. When drummer Sally Gess takes the helm for warp-speed licorice bits like "Hey Girl" and "Short Fuse," Fabulous Disaster is as hyperkinetic as vintage Screeching Weasel. But their real strength lies in the potent power-pop of endless-summer choruses like those on "The Other Day," "Don't Wanna Sleep," and "No Stars Tonight." The Donnas may be more telegenic, not to mention more beholden to boy metal, but FD's lyrics, mostly written by singer Laura Litter, touch on everything from bad breakups and work pals to bipolarity with a shade more depth than "Take Me to the Back Seat." Instead of the back seat, the Fabulous Disaster is sitting at the wheel, waiting at the stoplight, getting ready to zoom off on that "Next Big Joyride." Won't you join them? (Emo's Main, Friday, March 14, 8pm)