Attacking the busiest week in the Live Music Capitol

Back in the Hole

We knew it was only a matter of time until things turned around, and now they have. A group of investors has signed contracts and plans to reopen the Hole in the Wall in May, says J.D. Torian, who will handle booking for the reborn club. The Drag-bound live music landmark, which closed last June due to held-over boomtown rents, had been an Austin institution for almost 30 years, home to everyone from Nanci Griffith's first gigs to one of Doug Sahm's last SXSW appearances. An announcement is expected to coincide with Paul Minor's "Hole in the Wall Gang" tribute tonight at the Austin Music Awards; Torian said he hopes to bring back the Rock & Roll Free for All and provide a venue for newer bands. "We're open to suggestions," he said. Sadly, one musician who won't be there to toast the returning Hole is local drummer Kris Van Robbins, who took his life on Wednesday, March 5. Robbins, 32, played with several local outfits, including Color, Danni Leigh, Jane Bond, and Kevin Fowler. He also delivered the Chronicle for a number of years, and our condolences go out to his friends, family, and loved ones.

Everybody knows SXSWeek is one long party, so here's a brief field guide to what to expect at various functions around town. Lots, lots more in Club Listings, p.102.

BEST PLACE TO HAVE AN OUT-OF-BODY EXPERIENCE AFTER A SCOOP OF ROKY ROAD:

BEST PLACE TO FIND SHAGGY HESHERS WHO DON'T GIVE A FUCK ABOUT SXSW:

BEST PLACE TO HEAR SOMEONE FROM CHICAGO GO OFF ON OBSCURE 1920s STRING BANDS:

BEST PLACE TO ANNOY MUSIC-BIZ DRONES WITH YOUR TEXAS ACCENT:

BEST PLACE TO FIND EVERYONE TOO HIP FOR THE 'SPIN' PARTY:

BEST PLACE TO KILL YOUR SXSW HANGOVER BY GETTING EVEN MORE WASTED:

Your living room on St. Patrick's Day, Monday, March 17, watching the Sundance Channel's Shane MacGowan documentary, If I Should Fall From Grace.

Sound Exchange is gone, yet on my desk are three dozen examples of spanking-new local music. Here are 12 reasons Austin is still a better music town than wherever you live:

AMBERJACK RICE, "Big Fire Breathing Horse": Fleet-fingered gospel-blues to beat the devil, and the beer-induced topic of discussion between Rice and his spectral grandfather. (New Roots)

BREWTALITY INC., "Gonna Keep Drinking": Texas terrors get the Ramones off their tits on Lone Star and Wild Turkey. Not to be heard on an empty stomach. (Too Drunk for Punk)

VOLCANO, I'M STILL EXCITED!! "The New Brad": The new Brad could pass for the old Rufus Wainwright until the chorus, which ups the ante with off-key indie rock. (Carbon Copy)

SHANDON SAHM, "80s Metal Song": Just in case the Scorpslike wails and scalded-cat solos don't help, the sole lyrics are "this is an Eighties metal song." (Good Thoughts Are Better Than Laxatives)

SLOW READER, "Every Part of Nothing": Agreeably lo-fi, acoustic-driven daydream luxuriating in the sunny harmonies of voluntary inertia. (Slow Reader)

ROCKLAND EAGLES, "I Am a Rocket": Low-slung homage to ZZ Top and the good old days when the riffs were heavy, the carpet was shag, and the drinking age was 18. (demo)

WE TALKED ABOUT MURDER, "Social Lubricant": Jittery, a-melodic crossbreeding of punishing guitars and romantic anxiety. Welcome to Austin, y'all. (Expecting the Explosion) 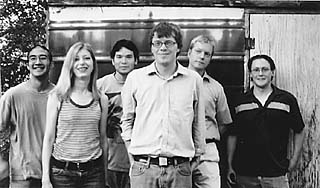 Some of the most dedicated music fans anywhere work in local record stores; here are some of their favorite Austin acts.

, Waterloo: "The Octopus Project and Via Satellites. Both are organic, a product of the people involved and not any particular style of music."

RYAN ENRIGHT, Jupiter: "Lowery 66 -- nobody else does what they do. I saw God Drives a Galaxy, and they blew me away. The Stingers are incredible, and I love the Weary Boys."

MARIA GONIMA, 33 Degrees: "Stars as Eyes. It's something different; a new take on progressive rock with electronics."

JASON SHIELDS, Cheapo: "High Noon, the best rockabilly band of the last 20 years; D.B. Harris, the coolest thing in Austin; and Heybale, the most talented band in the world."

CHARLIE JONES, Donkey: "The Bulemics, and all the little kid bands like the Distressed. They keep the skate in punk rock." 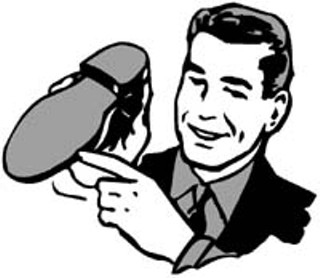 Which Way to the Free Beer?

All too often, SXSW feels like a barbecue-and-bunion-intensive episode of Survivor, so "TCB" asked assorted music-industry locals (and one ex-local) for advice on how not to be voted out of the afterparty.

MARK RUBIN, 1001 Nights: "I would direct folks to the '300-pound Guy's Guide to Good Eats' www.markrubin.com/sxsw/eats.html."

KENT BENJAMIN, Pop Culture Press: "Wear the most comfortable shoes you own. Dressing in all black marks you clearly as a tourist. Plan your evening around the most essential bands, and fill in with bands within walking distance."

DIANNE SCOTT, Continental Club: "SXSW for me is like 'Death by Chocolate' to a choco-holic: I thrive for exactly a week on not enough sleep, too much coffee, and more first-rate live music than most people hear in a lifetime!"

CHRIS RIEMENSCHNEIDER, Minneapolis Star-Tribune: "Too many people I know go crazy on the first two nights and are then winded by Friday. While I understand the urge, especially after tasting Minnesota margaritas, don't overdo it. Unless, of course, it's free."

EMILY FAWCETT, Club DeVille/ Privilege: "In short, a healthy dose of cardio, Jäger, and, if you're that type of person, No-Doz can help you through the week. If you are from out of town: Please don't move here!"

RAY SEGGERN, 107.7 The End: "As with any marathon, I 'train' for a couple of weeks to ramp up to convention-level drinking. Earplugs are condoms for the music biz, and it's a given you'll have multiple partners this week, so wear protection."

JILL MCGUCKIN, McGuckin Entertainment: "I focus on keeping a sense of humor and 'emergency' chocolate bars within easy reach. I change my shoes at least twice a day, and don't start drinking until after 10pm."