Long May You Run

To recap: The last couple of years have been as kind to Austin music as dot-bombers parked outside Liberty Lunch. The Hole in the Wall closed, the Mercury is on borrowed time, Antone's changed hands, Steamboat relocated, the Metro was shuttered, the Empanada Parlour bit the dust, and the Black Cat was gutted by fire. Sound Exchange ended its 23-year tenure on the Drag at the end of January.

Meanwhile, bending to pressure from Downtown residents, the city of Austin imposed a new noise ordinance for bands at outdoor venues. Considering that anyone living downtown is paying a premium to be in the middle of the action, the noise ordinance is akin to purchasing a house under the Austin-Bergstrom flight path, then complaining about the noise. It would seem that at this point, if Austin's music scene is thriving at all, it's in spite of rather than because of the city of Austin.

Yet to blame the turnover of Austin's live music scene solely on unreasonable real estate rates and political factors is missing the point somewhat. What's happening here in the hot springs of the Live Music Capital is in reality a turnover in talent. Long gone are the days when Austin was defined by its blues scene, while the bar bands that inhabited the Hole in the Wall and the long-gone Austin Outhouse have morphed into the garage bands that park in the clubs on Red River. Austin's thriving college rock scene is more vibrant than ever, even as a new generation of singer-songwriters takes up where the Blaze Foleys and Nanci Griffiths of yesteryear left off.

In fact, a little birdie tells me that preliminary returns on this year's Austin Music Poll are reflecting this trend. Appropriately enough, so will the 2002-2003 Austin Music Awards, which kick off South by Southwest next Wednesday at 7:55pm sharp.

For instance, few songwriters have made more promising inroads here in Austin than College Station troubadour Ruthie Foster and her partner in rhythm, Cyd Cassone. With last year's critically acclaimed Runaway Soul, Foster shot to the head of the local singer-songwriter class with a powerful, earthy style that draws from blues, gospel, and folk with echoes of Mahalia Jackson and Sarah Vaughan ringing in her voice. Foster and Cassone will no doubt launch this year's AMA with their well-honed busker's bark and songwriter's bite.

Next up at the prom is another one of last year's singer-songwriter success stories, Chip Taylor and Carrie Rodriguez. Taylor is, of course, the pen behind the Troggs' "Wild Thing," Waylon Jennings' "Sweet Dream Woman," and Janis Joplin's "Try (Just a Little Bit Harder)," as well as "Angel of the Morning" and "Son of a Rotten Gambler." After some 40 years in the business, the NYC-based Taylor discovered fiddle player Rodriguez, daughter of onetime Austin songwriter great David Rodriguez, at last year's SXSW, and they threw their fortunes together for Let's Leave This Town. It was a serendipitous matchup, with the album camping out on the Top 10 of the Americana charts for three months.

The Hole in the Wall may be shuttered and up for rent, but its legacy as one of Austin's beloved live music institutions is a long way from being forgotten. The Music Award's next musical segment brings together the Hole in the Wall Gang, a lineup of Hole regulars, headed up by Free-for-All emcee Paul Minor. Tell me this doesn't sound like a typical bunch of the usual suspects from the old Drag hangout: Jane Bond, Beaver Nelson, Troy Campbell, Scrappy Jud Newcomb, Fastball's Tony Scalzo and Miles Zuniga, Darin Murphy, Ted Roddy, Andrew Duplantis, Matt Hubbard, and Barbara K. Those with fond memories of cheap cans of Pabst and the rogues gallery of portraits around the walls should feel more than a twinge of nostalgia when the gang starts kicking ass and taking names. 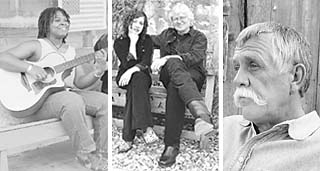 Speaking of blasts from the past, the evening's main set hearkens back to the days of the Soap Creek Saloon. Steven Fromholz, Ray Wylie Hubbard, Rusty Wier, Ray Benson, Bob Livingston, and the one and only Billy Joe Shaver, plus some very special surprise guests will demonstrate what Seventies-style redneck country music was all about. And don't think that "The Improbable Return of Redneck Rock," as the set has been dubbed, is just another trip down memory lane; it too reflects a turnover in the local scene. Texas music is currently in the throws of an enormous national resurgence, something that has not gone unnoticed by Fromholz.

"With guys like Pat Green, Cory Morrow, Kevin Fowler hitting it big, Texas music is really jumpin'," says Fromholz, one of the forefathers of said genre. "Then again, folks like Marcia Ball and Asleep at the Wheel are still here and have always been here, so maybe things don't really change that much. After all, my friend Ray [Benson] has brought in, what, 11, 12 Grammys now?"

Then again, Fromholz has definitely taken note that things in the local music scene aren't all beer and skittles. He doesn't even play in Austin much anymore, veering toward Poodie's Hilltop and Gruene Hall instead.

"The bar scene here is about drinking, not about music," notes Fromholz. "It's a lot easier to make money selling $5 margaritas than making it from music. I remember James White at the Broken Spoke telling me once, 'If they're dancing, you can keep playing here. When they quit dancing, you're done, because if they're dancing, they're drinking, too.'"

Reports that a growing segment of new country radio stations are starting to switch over to classic country (meaning pre-1980) leaves Fromholz skeptical.

"Classic country is Hank Locklin, Ernest Tubb, stuff like that, the guys who were making country music back in the Fifties and Sixties," explains Fromholz. "I love George Strait, he's certainly true to form and making real country music. I do think that the great thing about country music is that it will survive no matter how people fuck it up.

"It all came from bluegrass and folk music anyway, songs about heartache and loss. Music and humor, y'know -- if you have a heartache, you can still laugh at yourself. I was talking to Willie [Nelson] and asking him how he manages to overcome writer's block. He said, 'It's easy. I just go out and get my heart broken.'"

"I saw Shania [Twain] at the Super Bowl halftime. What the hell was that, anyway?"

In a rough year for the city's economy and the music scene in general, sweeping changes in the Austin Music Award winners are good, a sure sign of life. Old favorites take their place in the Hall of Fame, and up-and-comers step into top categories. Clubs come and go, bands form and break up, but some things don't change a whole lot. Like the Austin Music Awards, dedicated to preserving the past, honoring the present, and predicting the future. Long may they run.