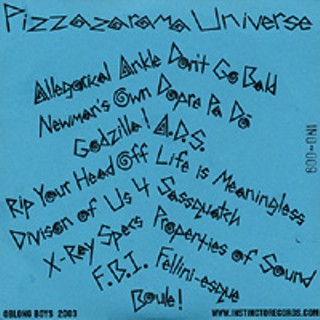 Pizzazarama Universe (Instinct) It's hard to decide whether the Oblong Boys' debut is a soundtrack to the zany, colorful, construction-paper costumes and silly hats they don onstage or if the costumes are a reflection of the music. By itself, the Oblong Boys' Pizzazarama Universe, the first recorded distillation of the arcane genre of zolo music, is a head-scratcher. At first it sounds like contrived nonsense, but the Oblong Boys are dead-serious about zolo, explained on the Zolo Synthesis (www.oit.pdx.edu/~psu14927/zolo.html): "Surreal tales of frolic and whimsy script the bright beyond mortal assimilation of the boingy guitars, wobbly keyboards, polka dot percussions, hiccupping falsettos, jerky/staccato beats, and lopsided rhythms." You couldn't ask for a better description of the Oblong Boys' music, a successful distillation of the idiosyncratic and absurd sides of such zolo artists as XTC, Gentle Giant, the Residents, and especially Devo. The lyrics cover such whimsical subject matter as UFOs and existentialism, but mostly the vocals are complete gibberish, high-pitched rhythmic psychobabble delivered as an intricate shout-out to the zolo in all of us. "Dopre Pa Dó" features sped-up chipmunk vocals behind waves of synthesizer. "Boule!" rides an engaging New Wave bounce behind a rising and falling violin line and vaguely French utterings. To the unprepared, the Oblong Boys might sound a bit like retarded children, but the creative energy is absolutely crackling, making Pizzazarama Universe a pure artistic spasm, the aural equivalent of modern art -- for better or worse.