How much longer can Austin afford to be the live music capital? 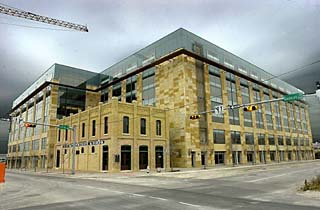 Downtown, lines mark the spots. Two clubs with the longest lines appear to be the newest: Cubra Libre and the Apple Bar. Both have laid out significant amounts of money renovating old Warehouse District properties, and both are built around different themes -- tapas, and martinis. There's one thing that unites them: Live music isn't part of their strategy. At these clubs, the name of the game is "Pass the Courvoisier," not "Pass the mic."

Welcome to the Live Music Capital of the World, where musicians and club owners have begun asking the same question: Where's the live music capital? Already more accustomed to grim bottom lines, Austin's live music economy started 2003 with a pair of less-than-encouraging signposts: the Mercury's closing in May, and Antone's last-minute bailout from Direct Events.

Add their stories to those of now-shuttered venues that include Liberty Lunch, and the Electric Lounge, (1999); Babe's (2000); and the Hole in the Wall, Empanada Parlour, and Black Cat (2002). Closures and turnovers of non- and semi-regular music venues also impact the local scene; in the last two years SXSW has lost access to more than a dozen venues, including Waterloo Brewing Co., Ruta Maya (which has relocated south), and the Metro.

While it's never been tough finding locals to grouse about Austin's tourist slogan, the wholesale downturn of live music fortunes in the last four years has been nothing short of shocking. Getting a handle on what's behind this sea change in the local club scene takes grasping a cyclical series of economic and societal factors that resembles a snake eating its own tail.