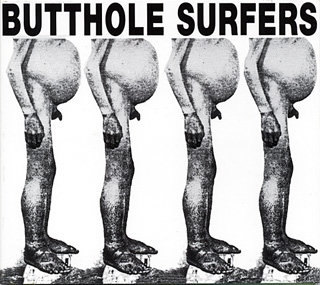 Butthole Surfers + Live PCPPEP (Latino Bugger Veil) The sphincter opens and out spills Paul Leary, screaming. "There's a time to fuck and a time to pray, but the shah sleeps in Lee Harvey's grave!!!" A musical apocalypse accompanies, no doubt via strict, Cagian deconstruction principles, but the guitarist ain't done. "There's a time for drugs and a time to be safe, but Jimi Hendrix makes love to Marilyn's remains!!!" Eat shit Elton John, stick those candles up your wind tunnel. "There's a time to live and a time to die, I smoke Elvis Presley's toenails when I want to get high!!!" Unplugging the Butthole Surfers' 1983 debut on Dead Kennedy Jello Biafra's SF-based Alternative Tentacles label, "The Shah Sleeps in Lee Harvey's Grave" hasn't lost a wink 20 years later. A scream raising hairs on everyone from Scratch Acid to Brown Whörnet, the Surfers are to Austin scunge rock what the 13th Floor Elevators were to psychedelic boogie: the active ingredient. Fortunately for mankind, the fever pitch anarchy of "The Shah" isn't sustained on the band's eponymous EP, reissued now on the Butts' Latino Bugger Veil imprint (LBVØ8) following last year's vault-uble gather-all Humpty Dumpty LSD (LBVØ7). It is, in fact, countered by the witchy "Hey," which in the coming-full-circle department, could've been an outtake on the local trio's most recent studio album, 2001's Weird Revolution. Not so of the squawking "Bar-B-Q Pope" or manic pathos of "Suicide," and certainly not the chaos theory of "The Revenge of Anus Presley," which slides unabated into the classic rock guitar ambience of "Cowboy Bob" that opens the first EP's mirror-image follow-up, 1984's Live PCPPEP. Live, "The Shah" comes off shockingly similar to the studio track, yet reaps the benefits of a few hardcores yelling at Haynes during the song's weepy final plea. The batty "Wichita Cathedral" plus "Hey" and "Something" churn seamlessly into the live "Gloria"(hole) of Dicks commemorative ditty "Gary Floyd," one of four bonus tracks tacked onto Ø8, including the corrupted children's song "Sinister Crayon" and avant horn-y "Something" demo. Mmm, yum: 55 minutes of brown goodness. Historically relevant liner notes would have been nice, but then the Buttholes have mostly dumped on convention their entire career. In today's Pepto-Bismol music business, we could use more of that and less Charmin.