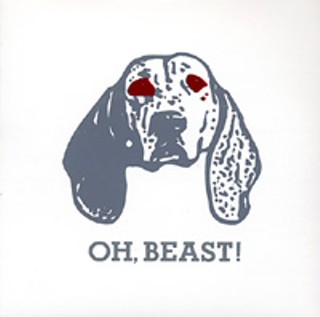 (Perverted Son) Emerging from the ashes of local prog-punk stalwarts Zulu As Kono, Oh, Beast! hones in on the former band's predilection for jagged cacophony from an entirely new angle. Whereas Zulu sought to blitzkrieg the listener with a six-man, double-drummer lineup, Oh, Beast! is a power trio with surgical strike precision. This six-track EP begins with "Cuhvulture," a slurred spiral into the Ninth Circle that gets mired in a series of repetitious bass hiccups. Combined with pads of retro-futuristic synthesizer noise and eerie, helium-pitch chants, the song would make an excellent theme if The Omega Man ever gets remade. "The Sand/Ron N. Nude" could be interpreted as a malevolent, bottom-heavy ode to Ron Jeremy (or not), while "Ho-Ha-Ho" swirls a Jesus Lizard smash-and-grab with bluesy Beefheart Dadaism. Turning away momentarily from quick stops and sharp turns, the tribal rhythm of "Space Machine Gun" posits Oh, Beast! as brothers in arms with Pong, a sensible double billing if there ever was such a thing. Taken in tandem with their lock-step live shows, this disc portends a splendorous post-apocalyptic career for Oh, Beast! should it come to that.