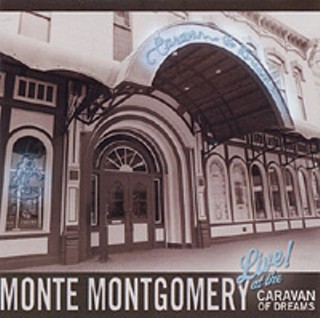 Live! at the Caravan of Dreams (TMG) The first thing to know about Live! at the Caravan of Dreams is that you don't have to buy it. The second thing is that Austin's Monte Montgomery is an enormously talented guitarist. The third is that talent and proficiency don't necessarily make compelling recordings. This 2-CD live souvenir comes without Montgomery's approval; he decried it on his Web site, saying, "In the near future I will comment further on the release of the Caravan of Dreams album, which I did not approve." That's a relief for longtime MM fans, who expect better output, while potential fans will most likely find the recording tedious. Naturally, Montgomery's chops are highlighted ("River"), even as they're neutralized by nebulous Seventies/Eighties California-style rock ("Hopin' That You'd Slow Down"). Surrounded by high-performance musicians, Montgomery can smoke 'em when he knows 'em ("Sounds Too Wonderful"), offering a little humor in his tongue-in-cheek rendering of Merle Haggard's "Silver Wings." Then there's the noodling. Live offers only 16 tracks over two discs, many clocking in at nearly 10 minutes or more -- "Set Your Soul Free," "When Will I," "Love Come Knockin'," Fleetwood Mac's "World Turning," and Dire Straits' "Romeo and Juliet." These hardly compare to the endless "Took Too Long," an appropriate title for an 18-minutes-plus song that plays peekaboo with famous guitar licks from "Stairway to Heaven" and "Rhiannon." An overlong, sappy cover of Hall & Oates' "Sara Smile" doesn't help and serves as a reminder that the fourth thing to know about this recording is the time-honored caution about live recordings: They're generally contractual filler.