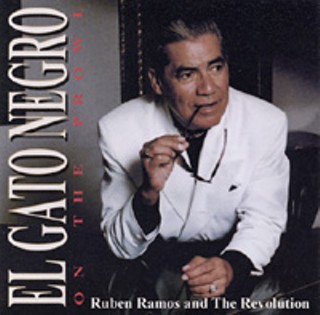 On the Prowl (Revolution) At least six lifetimes in (63 next month), Ruben "El Gato Negro" Ramos is forever On the Prowl. Following 2000's self-explanatory A Class Act and before that a Grammy for his singular contribution to Los Super Seven (Ramos being the all-star group's anchor and senior member), East Austin's Tejano veteran makes catting around look like the fence sport it is on Prowl. Swiping a bit of LSS appeal by reprising a number off both albums, Los Super Seven's lead-off/standout "El Canoero" and Canto's equally game "El Pescador," Ramos then wastes no time putting together Los Super Three: Señor Black Cat, Little Joe Hernandez, and Roberto Pulido. Suave -- synthesized strings and all. Luckily, the rest of On the Prowl is thick with accordion, trumpets, trombones, and saxes, especially the saucy San Antonio soul of "Barbacoa Blues," which pays tribute to its author, the late Randy Girabay. Lest one forget the commercial underpinning of Tejano music, Miami meringue "I Wanna Dance" shakes it loose, even as snatches of Cuban and Puerto Rican flavoring sizzle throughout. Cantina carouser "El Presumido" features Ramos' crack band -- brothers at every turn -- but not Ruben himself, while the wheezy workings of programmer Rick Fuentes ("Rixmix") close out the tab with an instrumental that somehow evokes a Latin "reimagining" of "The Entertainer." El Gato Ramos has so many lives even this is purr-fect.