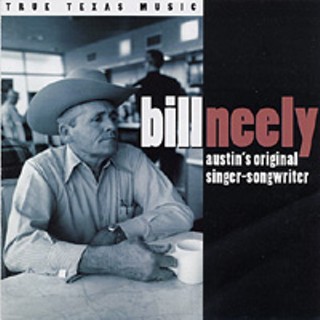 Austin's Original Singer-Songwriter (Lost Art) Bill Neely's country-blues are as thick as the coffee-black soil in cotton-patch outpost McKinney, Texas, where in 1916 he was born to an area still several decades away from Metroplex sprawl. The key song on this recording, from a February 1985 KUT LiveSet, is "Blackland Farm," wherein a road-bound Jimmie Rodgers teaches young Neely a C chord and gives him a ticket to his show. The Brakeman is obviously Neely's chief inspiration (he covers "Hobo Bill's Last Ride"), but "Skid Row" and "Means to an End" supply plenty of down-and-out misery on their own. It's not all glum -- especially twinkling travelogue "Texas Map Song" -- plus, Neely and partner Larry Kirbo's agile finger-picking style is pleasant if repetitive throughout. "Blues on Ellum" is a savory description of Dallas' storied avenue of sin, while LiveSet closer "Satan's Burning Hell" amusingly admonishes its listeners to stop worrying about going to the moon and get right with God. Fittingly, four tracks recorded by Lost Art owner Tary Owens in 1965, are even more primitive; when's the last time you heard somebody sing about sleeping in a wagon yard? Austin's Original Singer-Songwriter is too rustic by at least half to have any sort of mass appeal these days, but Neely, who died of leukemia in 1990, and his ilk remain the reason Austin has a music scene in the first place.