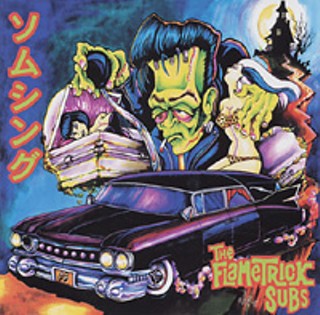 Something in Japanese (Kranzke) What's to be said about the Flametrick Subs that hasn't been said about the Cramps? Plenty. The Cramps don't call Austin home, and they've never played anything as rousing to a Lone Star heart as "The Pride o' Texas." The Subs make no bones about kissing the Cramps' skull ring ("The Crusher," "Can't Find My Mind") or wading into the same dark swamps as Southern Culture on the Skids and Tito & Tarantula. Who else would profess, "Some folks like water, some folks like wine -- not me, I dig the taste of that strychnine"? One of five covers, the Sonics' "Strychnine" is in fine company alongside an appropriately salacious rendering of Sam the Sham & the Pharaohs' "Lil' Red Riding Hood" and the classic late-night sing-along "Plastic Jesus." Otherwise, the Subs' kitschy psychobilly speaks for itself on song titles alone ("Mad Scientist," "What Makes a Good Girl Go Bad?," "Drinkin' With Dad"), with bonus points for its Rob Zombie-cum-Big Daddy Roth cover artwork. And with the Flametrick Subs, it ain't ever over till it's over. After "Jet Black Cadillac" comes track 66.6, a countrified ditty called "Government Issue Bathroom Tissue." The only thing wrong with Something in Japanese, the band's third CD, is that Satan's Cheerleaders don't shimmy into your living room when you crank it up.